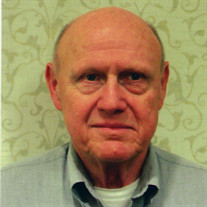 Henry A. Weech, Jr. February 21, 1938 – February 7, 2021 Henry A. Weech, Jr., “Hank”, was born February 21, 1938 in Iowa, of native Floridian parents who had gone north to find work. With the start of WW II, the family returned to Florida, living in Winter Park and Tampa before settling in Orlando, which he considered his home town. Hank graduated from Edgewater High School and went on to the University of Florida where he earned his BEE degree and was commissioned a 2nd Lieutenant in the USAF. His first assignment was to Ft. George Meade, MD as a development engineer. While stationed at Ft. Meade he married his wife Margaret, whom he had met at UF. He was selected by the USAF to attend Graduate School at the University of Missouri where he earned a MSEE. From there he was assigned to the Corona Satellite Program Office in Los Angeles. He did a variety of tasks, culminating with the assignment as lead engineer for the Agena Satellite Vehicle on which the payload was mounted. From Los Angeles, Hank continued his westward journey with an assignment as Chief, Electronic Systems Division (ESD) Field Office at Clark Air Base in the Philippines. In this assignment he was responsible for the installation of a major communications system and a new radar system for early detection of ICBMs. His next assignment was back home to University of Florida as an Associate Professor of Aerospace Studies in AFROTC Detachment 150. He was the instructor for third year cadets and functioned as the Detachment Executive Officer. His next assignment was to HQ, Electronic Systems Division at Hanscom AFB in Bedford, MA. There he served as Chief Test Engineer for a new communication system being developed for the Strategic Air Command. Changing positions, he served as Chief of Development for the Tactical Air Battle Management System. In this job he led the hardware and software development and test for a major modification to improve the basic capabilities and interoperability of this large-scale tactical system. Upon retirement from active duty, Hank worked as an engineer for defense contractors supporting the USAF and US Army. His specialty was interoperability between the systems used by the separate services of the Department of Defense. At one point he was Vice President of Engineering for a firm conducting communications studies for the US Army. Upon retirement, Hank and Margaret made several cruises which gave them the urge to do as much travel as they could. Moving to Oak Hammock in 2006, Hank joined the Travel Committee and helped organize many trips to Europe, the Caribbean, Canada and the US. He served as Chairman of the committee several times. Having been diagnosed with Chronic Leukemia, Hank tried to take on as many activities as he could – travel being the most active. In addition to travel, Hank was active member of the First Presbyterian Church of Gainesville, serving on the Property, Stewardship, and Communications Committees. He is survived by his wife of sixty years, Margaret, a daughter Shari Boulay (Paul) and a son Keith Weech. Also survived by granddaughter, Lauren Boulay (Ashley) and great grandchildren Dana and Bruce. Due to COVID, no service will be held at this time. Memorial gifts may be directed to the First Presbyterian Church of Gainesville or the Oak Hammock Benevolent Fund.

The family of Henry A. Weech Jr. created this Life Tributes page to make it easy to share your memories.

Send flowers to the Weech family.