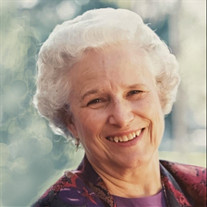 Our beloved Helen Ruth Wyatt, 97, of Gainesville, Florida, joined her Lord and Savior peacefully on 3 July 2021. She was preceded by her Mother and Father, Laura and Wiley Roberts of Abingdon Virginia, her brothers, Norris and Delano, her sisters, Karlene and Jean, her beloved husband of 53 years, Everett, and her youngest son, Jeff. Her surviving brother, Charles and his wife , Sylvia, are Gainesville residents, ` . Mom was truly representative of the ‘Greatest Generation’ whose military husband was active during WWII, Korea and Vietnam. Her son, Randy, also saw active service in Vietnam. She was a loving wife and mother, a strongly religious woman who was generous and loving to everyone and was also active in the Church of Christ. Need help, call Ruth. She was also a staunch Democrat. In 2008 she was awarded for fifty years of active service to the Democratic Party. She continued her work for another ten years. Mom was also inspirational to her 3 children; Randy, Don and Jeff. There was no doubt in her mind that Randy & Don would graduate from college, something that she always hoped to do but never had the chance. Jeff had Down’s Syndrome and lived with Mom until he passed at age 54. Ruth was a trail blazer in advocating for services and educational opportunities for special needs children. She formed a small group of Mothers who lobbied the education department to allow their Special Needs children to be enrolled in school in line with laws requiring all children to attend school. She continued to advocate for their human rights and an educational standard befitting all children. Randy and Don both completed college and had successful careers. In her own career, initially at the University Bookshop, she was responsible for acquisitions of second-hand texts and textbook stock control. She was active in promoting the position of women in the workplace and the community. She worked full time for a major bank in Gainesville, holding levels of responsibility and gaining great respect and solid friendships. She took pride in being able to work until she was 84 years old. She enjoyed road trips with Jeff, his fiancée Therese and Therese’s mother. Later she loved travelling to see her sister in Indianapolis and relatives in several States with Don and his wife. Her grandchildren provided enormous happiness and joy once Randy and Don had left home. She was a GREAT Southern cook and loved to feed the kids all their favourite dishes; eggs, biscuits and gravy, fried chicken & okra, etc, etc, etc. She never had trouble getting anyone to the table. She also kept them on the go with trips to the beach, Silver Springs, Disney World and other assorted amusement parks. She enjoyed these attractions as much as her grandchildren did. She was known and respected in her church and in the Gainesville Community where she was active and supportive of the disadvantaged. Mom wanted to spend her later years at home. She was blessed by Donna Simpson, a long-time friend who became her full-time Caretaker and the daughter she had always wanted. Donna loved Mom and was with her to the end. God Bless you Donna. Everyone that was fortunate enough to know Ruth loved and respected her. She will be missed, and may she Rest In Peace. A funeral service will be held Saturday, July 10, 2021, at 1:00 p.m. in the chapel of Williams-Thomas Funeral Home Downtown, 404 North Main Street. The family will receive friends one hour prior to the service beginning at 12:00 p.m. Interment will follow at Forest Meadows East.

Our beloved Helen Ruth Wyatt, 97, of Gainesville, Florida, joined her Lord and Savior peacefully on 3 July 2021. She was preceded by her Mother and Father, Laura and Wiley Roberts of Abingdon Virginia, her brothers, Norris and Delano, her sisters,... View Obituary & Service Information

The family of Helen Ruth Wyatt created this Life Tributes page to make it easy to share your memories.

Send flowers to the Wyatt family.