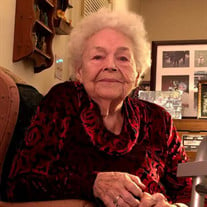 Helen Craig Jarrold, at the age of 97, passed away peacefully on April 21, 2020 at Lake Park of Madison Nursing and Rehabilitation in Madison, Florida. She was born in 1923 in Westborough, Massachusetts to Kenneth and Barbara Craig. She attended Eli Whitney High School in Westborough, Mass; St. Mary’s in the Mountains, Littleton, NH; Abbot Academy Andover, Mass; Colby Junior College, New London, NH; and Katherine Gibbs in Boston, Mass. She served in the United States Marine Corps from 1943 to 1945 and was honorably discharged from the Women’s Reserve Battalion (Postal Duty) as a Corporal. Helen and her sister, Janet, grew up on a farm where they had goats and chickens and horses and an apple orchard in Westborough’ Massachusetts. It instilled in her a love of nature and the outdoors. She loved the beach too. She was a strong and free-spirited woman, adventurous and fiercely independent. She was in the newspaper once when she stopped on the side of the road to change a tire for a stranded driver. She loved singing along when playing her LPs of the old Broadway Musicals and Frank Sinatra and Tony Bennett. She loved singing at church and in the car on road trips and camping trips. She was a talented harmonizer. She loved John Wayne and Crocodile Bundy. Her favorite movie was “On Golden Pond”. Her hobbies were hooking rugs and sewing. She always looked cute in her color coordinated outfits with jewelry and headbands to match. And she loved her muumuus. She loved getting mail and writing letters which I think she inherited from her father, and she was so proud of all the birthday cards she used to get on her birthday every year. I think the happiest time of her life was when she was in the Marines and her favorite job was being a home health aide where she grew very close to the lady she took care of until she died. In 1946 she married Jerome Thomas Jarrold and raised 3 children in Huntington Station, LI, NY. It was fun having her as a mom growing up. Our favorite camping spots were Montauk on Long Island, Fire Island off the south shore of Long Island and Forked Lake in Upstate NY where we had to take a canoe to get to our campsite. There was skinny dipping, singing around the campfire (Dad played the ukulele), canoeing and exploring the wilderness. We went to Gilgo beach a lot too. We went on a lot of blueberry expeditions when they were in season and she made the best Blueberry Buckle, or we just went out for a long drive to the end of the north fork of Long Island. We had lots of pets (miniature schnauzers, turtles, parakeets, hamsters. Once we even babysat for her friends’ monkey and we rescued an injured bird) Then in 1970, when we all left home, she moved to Florida. She hated being cold. She had various secretarial jobs and then worked as a home health aide. After that she settled in Gainesville and lived there for the last 35 years of her life. There she lived independently in her own apartment until the age of 96. In Gainesville, she was blessed to have what she called her “adopted family” and a spiritual family who loved her very much and watched over her, and who she loved very much too. Our heartfelt thanks to: Sylvia Williams and her daughters, Lori McIvor and Lisa Short and her husband Chris; Bertha Jackson; Mickie and Al Lockhart; and her spiritual family from the University Evangelical Lutheran Church: Sharon and Les O’Brien, Sam Brill, Bruce Burgess, Bruce Frendahl, Gina Heddon, Joan Anderson, and Sarah Gilbert. She treasured and cultivated lifelong friendships. Pat and Jack Reddy (“Auntie” Pat and” Uncle” Jack) and their daughter Debbie Timer and husband Ron. Also, Rosalie St. Lawrence and Pat Savarese. She is survived by her sister, Janet Patillo and family (Frederick Edwards, Amy Coffin), her daughter Nancy Jarrold and Damian Garden and family (Anthony and Kim Rivadeneira and grandson Lincoln), daughter Wendy Robinson and family (Kenneth Robinson and Monica Meschiatti, Melanie and Stephen Cervone), and her very close and caring second cousin once removed, Martha Brooks and her son Jamie. Also, the sons of Dave and Lorna Craig, David and Douglas. She was predeceased by her son, Steven Craig Jarrold, and her niece, Barbie Futrell. Her interment will take place at the Florida National Cemetery in Bushnell, Florida on Monday, April 27th at 11:00 am. There will be a Memorial Service with military honors at a later date that is yet to be decided, when it is safe for people to attend. Memorial donations may be offered, if desired. In lieu of flowers, to: The University Lutheran Church 1826 West University Ave Gainesville, Florida 32603. There will be more pictures and interesting stories added next week, so please check back.

Helen Craig Jarrold, at the age of 97, passed away peacefully on April 21, 2020 at Lake Park of Madison Nursing and Rehabilitation in Madison, Florida. She was born in 1923 in Westborough, Massachusetts to Kenneth and Barbara Craig. She attended... View Obituary & Service Information

The family of Helen Craig Jarrold created this Life Tributes page to make it easy to share your memories.

Helen Craig Jarrold, at the age of 97, passed away peacefully...

Send flowers to the Jarrold family.