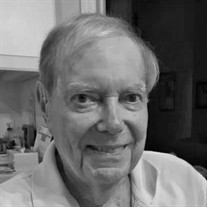 Hart Robert Stringfellow, Jr., eldest of four sons of Hart and Lillian Glass Stringfellow, was born March 14, 1924 in Natchez, Mississippi. Raised in Gainesville, Florida, he graduated from P. K. Yonge Laboratory School in 1942. He began his engineering studies with a year at the University of Florida, then entered the United States Army. After graduating from Engineer School at Fort Belvoir, Virginia in 1944, he received an appointment to the United States Naval Academy. Upon graduation from the Academy in 1948, he began what would be a twenty-year career as an officer in the Navy Supply Corps, serving on many ships—he was a "plank owner," i.e., a member of the commissioning crew, of the aircraft carrier USS Independence—and at stations in Japan and Panama. He retired to Gainesville in 1967, becoming the first Director of Purchasing for Santa Fe Community College. He followed his work at SFCC with a year at the Sperry Rand Corporation before returning to the University of Florida, receiving his M.Ed. degree in 1972. With his study of Computer Assisted Instruction in the identification of oral disease, he earned his Ph.D. in 1975. The same year, he joined the faculty of the UF College of Dentistry, retiring from the university fourteen years later. A lively raconteur and occasional poet, Hart was active in a multitude of civic and social organizations, including, but not limited to, Kiwanis and UF Retired Faculty (both of which he served as president), and, most important to him, Technocracy, Inc. Technocracy, he believed, allowed him to apply his engineering and education background to scientific solutions to macroeconomic and societal problems. He relished the opportunity to speak on the topic, whether to a large audience or to a single attentive listener. He was a lifelong member of Holy Trinity Episcopal Church. In his second year at the Naval Academy, Hart met Ernestine "Teen" Short of Denton, Maryland. The two were married in the Academy's Main Chapel one day after his graduation. Teen (and, eventually, their three children) accompanied Hart through all his travels with the Navy. At home in Gainesville, as in their Navy life, she was by his side in all things until her death in 2010. Hart Robert Stringfellow, Jr. died at home on Saturday, the fifth of September at the age of 96. He leaves behind his children: Kirkman Hart Stringfellow, Mark Christian Stringfellow (Zoë Wright Edwards), and Tina Louise Stringfellow (Richard Hassler); a grandchild, Alexis Ann Stringfellow; a sister-in-law, Jennie Stringfellow; longtime friend and caregiver Virginia Greider, and his dear friend and companion Betty Vasiliadis. His three brothers, William "Buddy" Stringfellow, Fred Stringfellow, and James Stringfellow, Sr. also predeceased him. [A full service in celebration of his life will be held when conditions permit.]

The family of Hart Robert Stringfellow Jr. created this Life Tributes page to make it easy to share your memories.

Send flowers to the Stringfellow family.