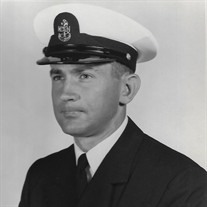 Harry G. Hooker passed away on January 22nd, 2022, just days past his 84th birthday. Harry was born in Jewell Valley, Virginia, on January 13th, 1938, in a small coal-mining town, to George C. and Ida M. Steele Hooker, both deceased. The death of his father died at age nine impacted him significantly. Harry was the last surviving member of his family. Diagnosed nine years ago with Alpha-1 Bronchiectasis, a genetic disease, he sought help at National Jewish Health in Colorado and UF Health. He fought a brave battle, outliving most men in his family. He had a zest for life and a love of sports, was very competitive and excelling at all he tried, living life his way. Harry ran thirteen Marathons, climbed mountains, and won two Golf championships. He was a Gator Booster and supported all sports, including women’s sports. Go Gators, and pressure, pressure. He joined the US Navy at age 16, desiring to see the World. He scored high on testing in Electronics, serving aboard two ships, including the U.S.S. Intrepid in Vietnam and VP Squadrons as a Radarman on VP plane Crews, including VP-45. This included the Cold War, keeping Russian ships from the US Coast by dropping depth charges on their submarines. He married the girl next door in 1957 at age 19; his wife, Judy Meadows Hooker, survives him. They celebrated 64 years together while moving 16 times in 18 years of military service. They had five children, four of whom survived him: Teresa D. Houston of Chattanooga, Tennessee; Keith H. Hooker (Leslie) of Lawrenceville, Georgia; Gregory Hooker, (Barbara) of Cambridge, England; and Christopher Hooker of Decatur, Georgia. A son, Jeffery Scott, died in 1963. Six grandchildren survive Harry: Justin Houston (Amy), Auburn, Georgia; Kyle Houston, San Antonio, Texas; Bailey Sharp (Ben), of Melbourne, Australia; Nicholas Hooker, Albuquerque, New Mexico; Keegan Hooker, Atlanta, Georgia; and Samantha Hooker, US Army, and one step-great-grandchild: Danica Welch, Auburn, Georgia. Harry loved the family he made and influenced his children educationally and otherwise. Harry retired honorably from the US Navy as an E-9 Master Chief in 1972. He continued his career as a US Postal Worker, retiring in 1999 after successfully heading a multi-million dollar project at the Jacksonville Bulk Mail Center. Much of his life was spent in Florida, living in Orange Park for 30 years, where they had lifelong friends. Upon retirement from the Postal Service, he and Judy designed and had a house built, moving to the Gainesville area in 2000. Harry requested Cremation at Williams-Thomas Funeral Home with no formal funeral. His family will gather at a later date to celebrate his sense of humor, love for family, and all he accomplished.

The family of Harry G. Hooker created this Life Tributes page to make it easy to share your memories.

Send flowers to the Hooker family.