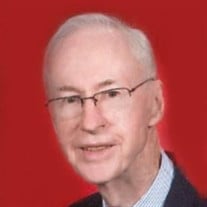 Harold Francis Snider, 97, died peacefully at Haven Hospice in Gainesville, Florida, on December 24, 2020, of old age. The son of Edward Joseph Snider and Mildred Irene Beaver Snider, he was born in Somerset, Ohio, on December 2, 1923. He served in the United States Army during World War II in the Corps of Engineers in the Pacific. He attended the University of Minnesota and Ohio State University, receiving a Master of Science degree in Mechanical Engineering from the latter. Immediately after graduate school, he was involved in research on liquid oxygen rocket engines at OSU as early space exploration was gearing up. He went on to work in the design and production of automatic controls and thermostatic devices, being granted at least nine U.S. patents, and capping his distinguished career as vice president for engineering at Therm-O-Disc, Inc., in Mansfield, Ohio. He moved to Gainesville, Florida, in 1987, and in retirement, he served as a visiting associate professor in the College of Engineering at the University of Florida. He taught engineering graphics and co-authored a book published in 2014, “Geometry of Design: A Workbook,” which is used by undergraduate engineering students. He was an active member of Trinity United Methodist Church. He was predeceased by his son, Phillip Lynn Snider, his first wife, Carley June Davidson Snider, and son-in-law Tom Samet, and is survived by JoAnn Sirockman Winkler Snider, his wife of 45 years; and by two daughters and their husbands, Jan Snider Samet O’Leary and Mick O’Leary, of Frederick, Maryland, and Betsy Snider Clement and Larry (Laurence) Clement of Dunedin, Florida. He is also survived by grandson Aaron Phillip Samet and his partner, Brittni Moore of Traverse City, Michigan; stepson James Winkler of Perrysburg, Ohio; and stepdaughter Nancy Winkler Talaba and her husband John Talaba of Clearwater, Florida, and their children, Mark, and Karen Talaba. There will be no funeral held at this time, due to the COVID pandemic. The family suggests memorial donations should be directed to a favorite charity.

Harold Francis Snider, 97, died peacefully at Haven Hospice in Gainesville, Florida, on December 24, 2020, of old age. The son of Edward Joseph Snider and Mildred Irene Beaver Snider, he was born in Somerset, Ohio, on December 2, 1923. He... View Obituary & Service Information

The family of Harold Francis Snider created this Life Tributes page to make it easy to share your memories.

Send flowers to the Snider family.