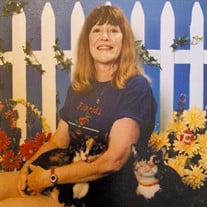 Grace Janet (“Grandma Kitty”) Hemmes passed away June 12, 2021, in Gainesville, FL at the age of 85. She was born in Bronx, NY on September 14, 1935, the daughter of Louis and Josephine Vallari. Grace was raised in Bronx, NY, and held an MA in Economics from the University of Puerto Rico and graduated Magna Cum Laude with a BBA in economics from Baruch College. She began nursing in 1976 and received an MSN in Nursing Administration from the University of Florida. Grace moved to Gainesville in 1987 and on March 14, 1998, she married Robert John (“Bob”) Hemmes in St. Augustine, FL. She was a lifelong Catholic and attended Holy Faith Catholic Church, singing in the choir for many years. Her personal greatest achievements were being a wife, mother, grandparent, and nurse. She was a cat lover and an avid sports fan. Grace loved the New York Yankees and was a huge supporter of all athletics at the University of Florida. She was a longtime member of the Fighting Gators Touchdown Club. Grace is survived by her husband, Bob, daughter Jennifer Canan Raiman (David), stepsons Robert Hemmes (Marcy) and Raymond Hemmes (Elizabeth), grandchildren David Jr, Jonathan, Matthew, and Makaylah Raiman; and Tyler Hemmes; a sister Dorothy Turnier, sister-in-law Betsy Harker (Richard), and many cherished nieces and nephews. Preceding Grace in death are her parents, Louis and Josephine Vallari, brother William Vallari, niece Denise Turnier Cassidy, as well as her husband, John; nephew Robert Turnier, brother-in-law Arthur Turnier and sister-in-law Joane Caputo. A Mass of Christian Burial will be held on Friday, June 18, 2021, at 9:30 A.M. at Holy Faith Catholic Church 747 N.W. 43rd Street, Gainesville with Fr. Emmanuel as celebrant. The family will receive friends on Thursday, June 17, 2021, from 5:00 P.M. to 7:00 P.M. at Williams-Thomas Westarea 823 N. W. 143rd Street, Newberry. In lieu of flowers, the family requests donations be made to; Northshore Animal League 25 Davis Ave. Port Washington, NY 11050 or https://secure3.convio.net/nsala/site/SPageNavigator/apple_pay.html?formId=7062, in Grace’s name.

The family of Grace Janet (Grandma Kitty) Hemmes created this Life Tributes page to make it easy to share your memories.

Send flowers to the Hemmes family.