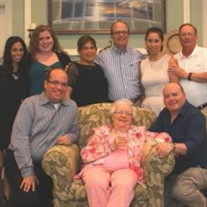 Gloria Gary passed away on January 6, 2022 at Oak Hammock at the University of Florida in Gainesville, Florida. She was 98 years old. Gloria was born in Mount Vernon, New York on September 1, 1923. She attended Hunter College in New York City and began her career at the renowned advertising agency J. Walter Thompson. She left the business world after she married her husband, Alfred Gary, on June 12, 1948 and devoted the rest of her life to raising and nurturing her family and to her many civic engagements. Gloria was a loving and dedicated wife and mother. She and Alfred were married for more than 60 years until Alfred died in 2011. Together they raised two sons, Thomas and Marc, both of whom were accomplished lawyers. The family lived in Englewood and Willingboro, New Jersey and Orlando, Florida. Wherever they lived, Gloria always made sure that their home was a community hub — a warm gathering place for family and friends. They were also members of the local Conservative synagogues where they lived and Gloria was the president of the Sisterhood at the Orthodox congregation in Englewood. Gloria always invited new friends to join family members at holiday celebrations. After her sons left for college, Gloria and Alfred moved to a 200 acre farm in Bordentown, New Jersey. There Gloria engaged in new agricultural endeavors such as canning tomato juice and cultivating fresh vegetables for the family dinner table as well as neighborhood diners. Her grandchildren would love to visit her on the farm, pick fresh vegetables for dinner, and ride the tractor. Throughout her life, Gloria was involved in the political process and was an advocate for good government. She was chapter President of the League of Women Voters and served on the League’s New Jersey State Board. She regularly hosted forums and cocktail parties for political candidates and had a deep knowledge of public policy. She instilled in her children the importance of an informed and active electorate and she led by example. At Oak Hammock she moderated for many years a current events discussion group. Gloria was also passionate about public education. She served on the board of trustees of Trenton State College, which focused on the training of teachers. She believed strongly that excellent teachers were the key to quality education and she was a strong advocate for making more resources available for teacher education. Gloria and Alfred were both worldwide travelers and life long learners. Wherever they lived, they took courses at local colleges and universities as well as learning at elder hostels. They enhanced their learning through travel in Asia, Europe, the Mideast, and throughout North America. They had a particular fondness for Asian culture and collected artifacts throughout their travels. Gloria was known for her warmth, ready smile and optimistic outlook. She delighted in her grandchildren and great-grandchildren. Her extended family was also very important to her and she loved to receive visits and notes from her nephews and nieces. Gloria is survived by her son, Marc, her grandchildren: Jordan Gary and his wife Anna Crane, Philip Gary and his wife Amanda Resnikoff Gary, and Tamar Friedman and her husband Mark Friedman; and her daughter-in-law, Olga Gary. She also leaves behind her great grandchildren, Abby Gary and Miles Friedman. She was predeceased by her husband Alfred Gary, her son Thomas Gary, and her daughter-in-law, Michelle Kravtin Gary. A graveside service for family members will be held on Sunday at 1:00 pm at B’nai Israel Cemetery in Gainesville, Florida. In lieu of flowers, contributions can be made to Haven Hospice of Gainesville or The League of Women Voters.

Gloria Gary passed away on January 6, 2022 at Oak Hammock at the University of Florida in Gainesville, Florida. She was 98 years old. Gloria was born in Mount Vernon, New York on September 1, 1923. She attended Hunter College... View Obituary & Service Information

The family of Gloria Gary created this Life Tributes page to make it easy to share your memories.

Send flowers to the Gary family.