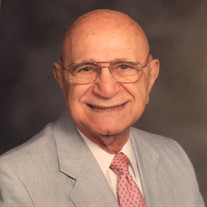 Gilbert Antonio Cicio, age 96, passed away peacefully in his home on Monday, February 8, 2021 in Gainesville, FL while holding the hand of his beloved wife, Anna. He was born in Downsville, NY to Tony and Minnie (Howe) Cicio. As a young boy, he surrendered his life to Jesus Christ as his Savior and Lord. He loved music and after his sister showed him the notes of the piano, he taught himself to play well enough to serve as pianist in the little Baptist church in his home town of East Branch, NY. He graduated from Hancock High School in 1943 and followed his love of music to become a sacred music major at The Missionary Training Institute at Nyack, NY (near New York City). It was in college that he learned to play the organ, after having to take formal piano lessons his first year there, and graduated with degrees in sacred music and theology. He also served in a non-combat, communications unit in the US Army. On August 28, 1954, he married Anna Jane More of Walton, NY. They would remain together for over 66 years. Between 1956 and 1962, they had 2 sons and a daughter and resided in the area of Kingston, NY where “Gil” worked as a business manager for the Rock Construction Dunham Tunnel Construction Company. In 1968, his employer gifted him with a trip to the Holy Land where he had the privilege of “walking where Jesus walked.” In the fall of 1976, after brief employment at a credit union in Kingston, He decided to move his family to the Hollywood, FL area where he worked as business manager; first for All American Memorial Church, then Miami Christian College. In 1986, he and Ann moved to Gainesville, FL where he rounded out his employment at Shands Hospital, retiring from there at the age of 63. Gilbert was a dedicated and loving family man. Activities he enjoyed with his family included camping and skiing. He also shared with his family, his love for God and his love of music and laughter. He served as organist and/or choir director in various churches in New York and Florida including: Grace Community Church, Kingston Nazarene Church, The Kingston Christian and Missionary Alliance Church (also youth leader), All American Memorial Church, Hollywood Hills Alliance Church, North Central Baptist Church, Gainesville Nazarene Church, First Baptist of Ocala, and Northwest Baptist Church when his failing eyesight caused him to “retire” as organist at the age of 88. Other musical highlights were singing in a quartet with 3 Shaver brothers and playing the organ at numerous weddings. Gilbert was preceded in death by his parents; brothers Alexander, William, Benjamin, and Howard; sisters Tressa, Wahneta, and Elsie. Survivors include his wife, Anna; son Ronnie (Margie) Cicio of Baltimore, MD; son Richard (Karen) Cicio of Gainesville, FL; daughter Cynthia (Daniel) Frost of High Springs, FL; 12 grandchildren, and 28 great-grandchildren. One of his granddaughters summarized the sentiments of the family when she wrote, “Although we are sad at his passing, we also rejoice with him in the fact that HE IS HOME, somewhere he has longed to be for quite some time now. For those who knew him, he had the humor and smile that could brighten any day. He had the quickest comebacks of anybody I ever knew, and could give you the biggest belly ache from laughing that you could ever have. To those that didn't have the privilege of knowing him, I'm sorry, you really missed out on a great man. He enjoyed playing the organ and was exceptional at it, but his eyes and ears failed him in this life until he could only play a few songs that he had memorized from playing them for so long. I can promise you that Jesus welcomed him home with the words "well done good and faithful servant" and promptly brought him to the biggest organ heaven has to offer. Until we meet again, Grandpa. I will sure miss your laugh, your smile, and definitely your sense humor. I love you.” A celebration of life will be held Saturday February 13, 2021 at 1:00 p.m. at Windsor Baptist Church, 918 SE, Co Rd 234, Gainesville.

Gilbert Antonio Cicio, age 96, passed away peacefully in his home on Monday, February 8, 2021 in Gainesville, FL while holding the hand of his beloved wife, Anna. He was born in Downsville, NY to Tony and Minnie (Howe) Cicio. As a young boy,... View Obituary & Service Information

The family of Gilbert Antonio Cicio created this Life Tributes page to make it easy to share your memories.

Gilbert Antonio Cicio, age 96, passed away peacefully in his...

Send flowers to the Cicio family.