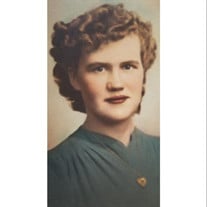 Georgia Mae Sexton journeyed from earth to eternity on March 29, 2020, 6 weeks before her 102nd birthday. She was born Georgia Mae Posey on May 8, 1918 in Oneida, Tennessee to Daniel and Eva Posey. Georgia was preceded in death by her parents Daniel and Eva Posey, her husband Ernest Sexton, three sisters: Ollie Shelton, Sadie Davis and Ettie Posey, six brothers: Floyd, Johnnie, Eldon, Robert (Bill), Curtis and Raymond Posey, son-in-law Burl Long, and great-granddaughter Lacie Helms. She is survived by her daughter Barbara Long, two grandchildren: Kym Helms (Mark) and Karen Keith, five great grandchildren: Jesse, Casey and Kelsea Helms, Ben (Justin) Keith and Bleu Anderson, and her great-great-granddaughter Skyler Helms. Georgia's talents were evident from an early age, skipping two grades in elementary school. This resulted in her attending Huntsville High School at a young age where she was the pianist and organist for her school. She began her higher education experience at East Tennessee State University, where she met her husband Ernest Sexton. Georgia transferred to the University of Tennessee where she earned both her Bachelor and Master degrees in Education. Georgia welcomed her only child, Barbara Jean, into the world in 1938. She began her teaching career in 1939 at Fork Mountain Elementary School followed by a tenure at Eagleton Village School in Maryville, Tennessee. In 1960, Pinellas County Schools in St. Petersburg, Florida, recruited both Georgia and her husband. She taught at multiple schools, including Roser Park Elementary and Lakewood Elementary. Georgia was always intellectually and socially progressive and was fittingly chosen as one of only five teachers to facilitate the first public school desegregation in Pinellas County. She also trained and mentored student teachers from Florida State University for many years. She received numerous teaching awards, before she retired from Pinellas County Schools in 1980. Georgia’s love of learning continued throughout her life as she completed all coursework toward a Doctorate in Education. In addition to her devotion to her students and family, Georgia enjoyed reading, fishing, playing the piano and bowling. She was a member of the First Baptist Church of St. Petersburg, as well as a member of the Eastern Star, Martha Washington Chapter #231. A graveside service will be held on Saturday, April 11 at 1:00 p.m. at Clark’s Grove Cemetery in Maryville, Tennessee. Flowers may be sent to Miller’s Funeral Home, Maryville, Tennessee.

Georgia Mae Sexton journeyed from earth to eternity on March 29, 2020, 6 weeks before her 102nd birthday. She was born Georgia Mae Posey on May 8, 1918 in Oneida, Tennessee to Daniel and Eva Posey. Georgia was preceded in death by her parents... View Obituary & Service Information

The family of Georgia Mae Sexton created this Life Tributes page to make it easy to share your memories.

Georgia Mae Sexton journeyed from earth to eternity on March...

Send flowers to the Sexton family.