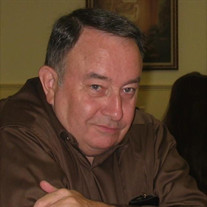 George Marion Harris, age 76, a lifelong resident of Gainesville, Florida passed away Monday, April 13, 2020. Marion was born to Lavoyd Vernon Harris and Louise Margaret (Leitner) in Gainesville, Alachua County, Florida on March 8, 1944. He graduated from Gainesville High School in 1962 and received both his bachelor degree in animal science and master’s in Agricultural Management and Resource Development from the University of Florida. Following college, he proudly served the United States Army in activity duty during the Vietnam War and reserves in the 301st Medical Field Hospital, for a combined 30 years. He retired with the rank of Lt. Colonel. Continuing his service with the reserves stateside, he worked as an insurance agent and financial advisor with several companies throughout his career. During his childhood, he was in the Boy Scouts of America and received his Eagle Scout with Bronze Palm and the Order of the Arrow, both in 1958. He also played on the varsity basketball team in high school. In college, Marion met the love of his life, Judy Harris, and married in 1969. Soon afterwards he was given his military assignment to Okinawa. While overseas, they had their first child in a daughter, Karen. They completed their family with a son, Kyle, five years later. Marion often told stories about visiting his grandparents Leitner in Shiloh where he fished, hunted, and helped out on the family farm. Often, he would reminisce about taking the train from Gainesville to McIntosh to visit the Harris family. He was also fond of sharing his opinions on Florida Gator sports and politics. Marion was well known for his lending ear, cheesy phrases, and love of Christ, family, and friends. A strong Christian, he was a long-standing member of North Central Baptist Church. Marion was also a long-time member of the Gainesville Lion’s Club (20 years) and Veterans of Foreign War. One of his favorite Lion’s Club fundraisers was the bi-annual barbeque chicken dinner held in the greenway outside the Gainesville High School band room where they would grill hundreds of chicken and package dinners. Marion was preceded in death by his father, Lavoyd Harris and mother, Louise Harris. He is survived by his wife of 50 years, Judith Wells Harris; children, Karen Harris Tilly (Michael) and Kyle Harris (Amber); brother, Tom Harris (Claudia); grandchildren, Brenden Tilly, Kaitlyn Tilly and Amelia Harris; and niece, Heather Harris and nephew, Todd Harris and many, many cousins. A celebration of his life will be held Thursday, July 9, 2020 11:00 a.m. at North Central Baptist Church. In lieu of flowers, donations can be made to the Gainesville Lion’s Club.

The family of George Marion Harris created this Life Tributes page to make it easy to share your memories.

Send flowers to the Harris family.