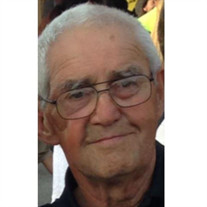 George Hazen Hamlin, 81, resident of Interlachen, Florida, died Thursday, April 30, 2020 in the Parklands Rehabilitation and Nursing Center, Gainesville, Florida, following a long illness. Mr. Hamlin was born on September 25, 1938 in Milan, New Hampshire to the late Alton and Madeline Hamlin. He lived most of his life in Chaplin, Connecticut working as a lineman for many years for Connecticut Light & Power and was a longtime member of the I. B. E. W, Local #42. He also served as a Mechanic in the CT National Guards. Mr. Hamlin was a member of the Sportsman’s Club in Ashford, CT; he enjoyed camping and fishing most importantly spending time with his grandchildren. He had a strong faith in the Lord. He was preceded in death by a brother, Willard Hamlin, a sister, Jacqueline Putney, a son, David Hamlin and by his first wife and mother of his children, Eleanor Hamlin. Mr. Hamlin is survived by his wife, Rachelle Hamlin, of Interlachen, FL; sons, Alton Hamlin, of Barton, VT; Mark (Cathy) Hamlin, of Bradford, ME and Daren (Anitra) Hamlin, Alpharetta, GA; a daughter, Judy (Mykola, Jr.) Markowycz, Chaplin, CT; a step-son, Larry (Lisa) Pericolosi, of Newington, CT; and Nine grandchildren & Eleven great-grandchildren. Burial services for Mr. Hamlin will be conducted in the Hillcrest Cemetery in Milan, New Hampshire.

The family of George Hazen Hamlin created this Life Tributes page to make it easy to share your memories.

Send flowers to the Hamlin family.