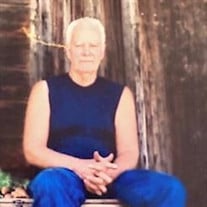 Frederick William Wood, Jr. died peacefully at his home after an extended illness on December 22, 2021, surrounded by his loved ones and eager to go to his heavenly home. Known as "Freddie" by all who ever met him, he was born in Fairfield, FL on July 8, 1937, and grew up in the Evins-Wood family home in his hometown of Evinston, FL. He attended the McIntosh School and Reddick High School, where he excelled in sports and the love of agriculture, which would become his life's vocation. He graduated from Reddick High School in 1955, and in 1958, entered military service after enlisting in the United States Army. After completing his tour of duty, and attaining the rank of Sargeant, Freddie married his sweetheart, Wilma Sue Brown, on October 6, 1963. He and Sue would go on to build a home in Evinston, raise a family and enjoy a happy marriage for the next 58 years. Freddie would spend his entire life doing what he loved best- farming and raising cattle well into his eighties. Sue would be Freddie's primary helper and encourager and would herself go on to serve as Postmaster at Evinston for 32 years, a post filled by generations of the Wood family. Freddie was a regular fixture, in and around Evinston and never met a stranger. His passion for family and community history would both entertain and educate tourists and neighbors alike. He grew and sold many fruits and vegetables through the Wood and Swink store, a historic landmark owned by the Wood Family for four generations. Freddie is survived by his wife of 58 years, Sue Wood; sons, Frederick William Wood III(Lilianna) and Rev. Theodore Evins Wood (Alicia); grandchildren, Luigi, Romina, Cody, Joshua, Jeremiah, Noelle, Austin, Sarah Jane, and Freddie (IV); great grandchildren Logan and Grayson. Brother Ashley Wood (Sara-Nett) and sister Jane Wood (Bill). He was preceded in death by his parents, Frederick William Wood, Sr. and Jane Yongue Wood, and his brother, Harry Wood. Funeral services will be held at Evinston United Methodist Church on Wednesday, December 29th at 10 a.m., with interment immediately following at Center Point Cemetery. In lieu of flowers, donations in Freddie's memory can be made to the Evinston United Methodist Church Building Fund.

Frederick William Wood, Jr. died peacefully at his home after an extended illness on December 22, 2021, surrounded by his loved ones and eager to go to his heavenly home. Known as "Freddie" by all who ever met him, he was born in Fairfield,... View Obituary & Service Information

The family of Frederick "Freddie" William Wood, Jr. created this Life Tributes page to make it easy to share your memories.

Frederick William Wood, Jr. died peacefully at his home after...