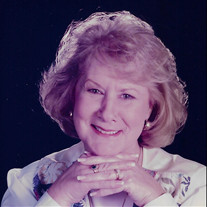 BLACKSTONE, FRAN, 83, passed away on February 1, 2021. Fran was born in Hamden, Ohio on August 19, 1937 to Russell and Thelma (Huffman) Bethel. Fran was a spunky girl who loved riding her grandad’s horses and her motorcycle. She married Chuck Blackstone at a young age and started a family. For the majority of her life, she stayed home and raised her children. Later on, she worked as a preschool teacher, which she loved. Over the years, Fran moved many places with her husband Chuck’s job, living in Ohio, Indiana, Florida, Texas, Georgia and back to Florida to retire. They lived in Orlando, FL for many years and she was very active in her neighborhood association there. They spent 20 years in Clearwater, FL enjoying retirement, and in 2017, Fran moved to Gainesville, FL to be near family. Fran was preceded in death by her loving husband of 63 years, Chuck Blackstone, her son, Mike Blackstone, and a brother, Russell V. Bethel. She is survived by her daughter, Pam Holbrook and her husband Don; son, Jack Blackstone and his wife Terri; brothers, Charles Bethel and wife Jacquelyn, John Bethel and wife Carolyn; five grandchildren, Ahren, Shana, Amber, Kelsie, Bailey, and Ryan; and six great grandchildren, Gryphon, Easton, Brooke, Benjamin, Forest, and Penelope. A Celebration of Fran’s Life will be held at a later date in Ohio, where Fran and Chuck will be buried together.

BLACKSTONE, FRAN, 83, passed away on February 1, 2021. Fran was born in Hamden, Ohio on August 19, 1937 to Russell and Thelma (Huffman) Bethel. Fran was a spunky girl who loved riding her grandad&#8217;s horses and her motorcycle. She married... View Obituary & Service Information

The family of Fran Blackstone created this Life Tributes page to make it easy to share your memories.