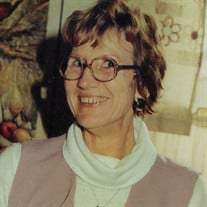 Eva Ruth Campbell Griffin, 95, longtime resident of Waldo, Florida, went to her heavenly home surrounded by her family on Saturday, January 30, 2021. Mrs. Griffin was born on March 16, 1925 in Lowndesville, South Carolina to the late Bennett Graydon and Essie Childs Campbell. As a young lady she joined the U. S. Cadet Nurse Corps, where she met Mr. Richard Eppes Griffin to whom she was married for 41 years until his death in 1987. Mrs. Griffin worked for many years as an administrative assistant in various offices of UF Health, until her retirement in 1983. She was a very strong woman of faith, a member of St. Paul’s Episcopal Church in Waldo; she began every day in prayer and bible study. Mrs. Griffin was a past Matron of the Order of the Eastern Star, Waldo. She was preceded in death by a great grandson, Brady Walden; a step-granddaughter, Shelly Bostwick, by her six sisters, Sybil, Lillian, Alliene, Anne, Vara and Jackie; and by her three brothers, Bennett, Gordon and Sonny. She is survived by three daughters, Jean (Ken) Bostwick, Evelyn Walden and Sherry (David) Edwards; five grandchildren, Doug, Renee, Sam, Wesley and Sue; Nine Great Grandchildren and 2 Great-Great Grandchildren; sister-in-law, Ruth and many nieces and nephews. Graveside funeral services will be held on Monday, February 8, 2021 at 2:00 P. M., in the Florida National Cemetery, Bushnell, Florida with Rev. Tony Powell officiating. The family will receive friends on Sunday, February 7, 2021 from 4 to 6 P. M., in the Williams-Thomas Funeral Home Downtown, 404 North Main Street. In lieu of flowers, please make donations to the Florida Sheriffs Youth Ranch.

The family of Eva Ruth Campbell Griffin created this Life Tributes page to make it easy to share your memories.

Send flowers to the Griffin family.