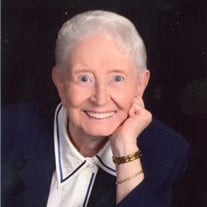 Esther A. (Carter) Yoder, D.HumL. was born on August 11,1938 and went home to be with the Savior she loved, on February 15, 2021 after a short stay at Haven Hospice. Esther was pre-deceased by her parents F. Elston and Ruth (Jones) Carter of... View Obituary & Service Information

The family of Esther A. (Carter) Yoder, D.HumL. created this Life Tributes page to make it easy to share your memories.