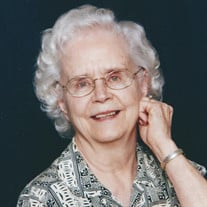 Elizabeth Varnado Harrer died peacefully January 9th, 2021 at Oak Hammock in Gainesville Florida. Lib was born December 1, 1923, the third child of Hugh Reid and Mary Ida Montgomery Varnado. She grew up in Pickens, Mississippi, and was known as “Sister” by the entire community. She happily joined her two adventurous older brothers, serving as a willing test subject for their many inventions, including flying machines and underwater scuba diving suits. She graduated valedictorian of her high school class and with honors from Mississippi State College for Women. Lib went on to earn a graduate degree in English at the University of North Carolina at Chapel Hill where she met her husband of over 50 years, Gustave “Gus” Harrer. They were married in Pickens in September of 1948. She joined the faculty of Millsaps College in Jackson, Mississippi for several years before retiring to begin a family. They had four children as she and Gus moved from Tennessee to California to Boston before finally settling in Gainesville, Florida. Lib was actively involved with the First Presbyterian Church of Gainesville, where she played the piano for the children’s choir as well as being a Girl Scout leader many years. A life-long educator, Lib was active in the PTA, and volunteered at schools tutoring children with learning disabilities. She could easily recite Chaucer and Shakespearean sonnets and astounded her grandchildren by naming the U.S. Presidents and most of the V.P.s in order. Lib loved gardening and was on the board of the Florida Federation of Garden Clubs, editing the newsletter and reviewing books. She particularly enjoyed flower arranging and judging competitions at the state level. She spent many summers active at the Wekiva Youth Camp instilling a love of nature in Florida’s young people. She was a member of the Gainesville Women’s Club, volunteered at Alachua General Hospital, and was a correspondent with the Tampa Tribune. She was preceded in death by her parents, brothers Bill and Hugh Varnado, her husband, Dr. Gustave A. Harrer III, and youngest son, Thomas “Tom” Harrer. She is survived by her children, Elizabeth (John) Royster, Kathryn Harrer, and Hugh Harrer; grandchildren, Rebecca (Kevin) Poplau, Samuel (Mary Brian) Yoffe, Erica (Blake) Bennett, and Daniel (Kate) Radford; and great-grandchild Malcolm Gustave Poplau. There are no services planned at this time. Interment will be beside her husband in Pickens, Mississippi at a future date. In lieu of flowers, donations may be made to ChildFund International at https://www.childfund.org/Ways-To-Donate/.

The family of Elizabeth Varnado Harrer created this Life Tributes page to make it easy to share your memories.

Send flowers to the Harrer family.