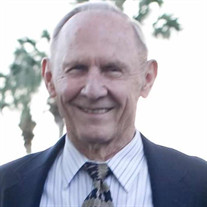 Earl Charles ‘Chuck’ Carlson – family patriarch, loving father, devoted husband, enthusiastic teacher, wartime pilot, aspiring businessman, strong leader, dedicated mentor, avid horticulturist, keen musician, ardent Gators fan, and consummate friend – passed away after a long battle with Alzheimer’s and COVID complications on October 7, 2021, at the VA Hospital in Gainesville, FL, just shy of his 92nd birthday. Born October 16, 1929, in Lake Alfred, FL, Chuck is survived by his wife of 68 years, Barbara Carlson; his daughter Deborah Carlson and her son Chris; his son Guy Carlson and wife Jennifer and children Wendy, Katie, Melissa, Olivia, and their families; and son Robert Carlson and his wife Valerie and children Cody, Chad, and Camie; and 13 wonderful great-grandchildren. After graduating from high school in Winter Haven, FL, Chuck entered ROTC at University of Florida (UF) in 1948. At UF Chuck was a member of the Delta Chi fraternity, was elected as Student Body President, served as the Drum Major for the Gators marching band, and was a diver on the Gators swimming team. In between all of these college activities, Chuck met the love of his life and future wife, Barbara D. Foy. Chuck graduated from UF in 1952 with a Bachelor of Arts in Education, whereby he was commissioned as a Second Lieutenant in the U.S. Army. He was promptly shipped off to Alaska, followed by assignments in Greenland and Ft. Eustis, VA. On Oct 28, 1953, Chuck and Barbara were married in Atlanta, GA, and then moved to Ft. Wolters, TX where Chuck attended helicopter flight training school. Their first child Debbie was born April 26, 1955, in Atlanta, GA, before Chuck was shipped off to Korea that year. The next year Chuck was reassigned to Japan where Barbara joined him, and their second child Guy was born on May 26, 1956. Upon returning to the U.S. in 1958, Chuck left active duty military service and worked as an insurance salesman in Columbus, GA, before moving to Colorado Springs, CO as a Dictaphone salesman. In 1959 Chuck reentered active duty military service and their youngest son Robert was born soon after at Ft. Benning, GA, on January 14, 1960. Following several more assignments around the country, Chuck entered the 5th Special Forces at Ft. Bragg, NC. He was then sent to Vietnam in 1963 as an advisor while Barbara remained behind with the children in Atlanta, GA. Chuck returned to the U.S. the following year and was subsequently assigned to Ft. Bragg, Ft. Wolters, and Ft. Carson, CO between 1964 and 1967. He was deployed again to Vietnam as a UH-60 gunship pilot with the 5th Special Forces from 1967 to 1968, where he fought in the Battle of the Tet Offensive and received the Bronze Star Medal with V-device for valor in combat. Upon completion of his second tour of duty in Vietnam, Chuck was reassigned in 1969 to U.S. Army Europe Headquarters in Heidelberg, Germany, where he was also able to complete his Master of Arts in Leadership from Boston College in 1970. Chuck and the family returned to the U.S. in 1971, where he completed his military career as the Professor of Military Science for ROTC at UF. Chuck retired from active duty military service as a Lieutenant Colonel in 1974 – ending his storied career 22 years later at the same institution where he entered service – his beloved UF alma matter. He went on to complete his Doctorate degree in Education Administration from UF in 1976 and taught for over 20 years in the Alachua County school system at Fort Clarke Middle School. In 1994 Chuck left teaching to become the General Manager at Heat Pipe Technology, Inc. where he worked until 2001 and then retired from his third career at 72 years old. Chuck went on to become the president of the Camelia Society of Gainesville and volunteered at the local Salvation Army post. Chuck led a long and full life. His life spanned almost a century, from the Great Depression to the Great Pandemic. He was many things to our family and to others, including a highly decorated combat veteran and war hero who fought in the Korean and Vietnam Wars, a schoolteacher and academic who positively impacted so many young children’s lives, a businessman who led a small engineering company, an agriculturalist who loved transforming his yard into a botanical garden … but most of all a loving father and husband who was a strong role model and family man. He was a principled man of dignity and honor who led by example and expected nothing less from his family. The Carlsons have much to thank this man for in serving as a guiding light and helping to shape our family. May God bless you and may you find peace and happiness in heaven. We love you dearly and miss you so much already. May you Rest In Peace. A Celebration of Life Memorial Service will be held for Earl C. Carlson on October 28, 2021, at 10 AM at the Williams-Thomas Funeral Home located at 823 NW 143rd Street, Newberry, FL. A follow-on graveside burial service with full military honors will occur at 2:30 PM at the National Veterans Memorial Cemetery located at 4083 Lannie Road, Jacksonville, FL, 32218 (phone 904-766-5222).https://goo.gl/maps/LRk9C6SoGsoKjwRk6 In lieu of flowers, please make a contribution to the Salvation Army, where Chuck volunteered for several years after retirement.

The family of Earl Charles "Chuck" Carlson created this Life Tributes page to make it easy to share your memories.

Send flowers to the Carlson family.