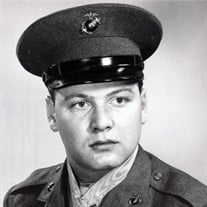 Duane Edgar Dewey, beloved father and grandfather, passed away at Clyde E Lassen State Veterans Nursing Home in St. Augustine, Florida on October 11, 2021. Duane was born in Grand Rapids, Michigan to Ernest and Mabel (Dorman) Dewey, on November 16, 1931. The family later moved to Muskegon, MI. In his late teens, Duane moved to South Haven, MI to live with his Aunt to work on the local farms. It was there he met and later married Bertha Bierhalter, prior to leaving for Korea. He and Bertha enjoyed 68 years of marriage before her passing in 2020. Duane served on the front lines of the Korean War with Easy Company, 2nd Battalion, 5th Marines. On April 16, 1952, Corporal Dewey, although wounded by an enemy grenade, smothered another exploding grenade with his own body to save the life of a corpsman and the other Marines around him. For that action he received the U.S. military's highest decoration for valor, the Congressional Medal of Honor. After the Marines, Duane worked at Everett Piano Company in South Haven for a few years prior to attending Michigan Veteran's Vocational School at Pine Lake, MI. There he learned to repair office machines, and after completion, he opened his own business, South Haven Office Machines. He also drove school bus for South Haven Public Schools for several years. In 1973, Duane and Bertha retired, sold their South Haven house, and moved to Irons, Michigan to the hunting cabin. That same year they started their annual trek to Gainesville, Florida for the winter to visit their grandsons. Duane greatly enjoyed hunting, fishing, golfing and playing cards. He also enjoyed getting together with his veteran buddies, especially if they were involved in any type of fund-raising event for the AMVETS, American Legion or VFW. He enjoyed traveling to attend E-2-5 annual reunions, Congressional Medal of Honor Society annual meetings, and to Medal of Honor Host City Gainesville Texas to attend annual celebrations for Medal of Honor recipients. Duane is a member of the Congressional Medal of Honor Society, the Korean War Veterans Association of Gainesville, FL, Navy League of the United States, 1st Marine Division Association, F. & A. M. Lodge #370 of Luther, MI, South Haven Moose Lodge #697, past Commander and Life member of VFW Post #667 of South Haven, life member of the American Legion Post #49 of South Haven, and a life member and past Chaplain of the Duane E Dewey AMVETS Post #1988 of Baldwin, MI. Duane is preceded in death by his parents, his wife Bertha, his sister Jean Sodini, and several brothers-in-law and sisters-in law. He is survived by his daughter Arline Broome of South Haven, MI, son Dwight (Kay) Dewey of Durham, NC, grandsons, Lenny (Lisa) Schmit of Lakeland, FL and Denny (Christina) Schmit of Williston, FL, his brothers-in-law Lester “Butch” Bierhalter and Philip “Tip” Bierhalter , 4 great-grandchildren, and several nieces and nephews. A Memorial Service will be held Tuesday, November 16, 2021 at 10:00 a.m. at Williams-Thomas Westarea Chapel. Burial will follow at 2:30 p.m. in Florida National Cemetery in Bushnell with full military honors. On Monday, November 15th, there will be a Celebration of Life for Duane and his wife Bertha Dewey at the American Legion Post 16, 4701 NW 6th St Gainesville, FL from 6:00PM to 8:00PM. This will be a feel good, make a toast and recall fun and happy stories about Mr. Dewey. There will be refreshments served and everyone is welcome. In lieu of flowers, contributions may be made, in Duane’s memory to your favorite Veterans organization.

The family of Duane E Dewey created this Life Tributes page to make it easy to share your memories.

Send flowers to the Dewey family.