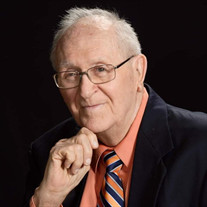 Douglas Erich Werner, age 82, passed into life eternal on Saturday, May 16, 2020. He was born May 24, 1937, in Plainfield, N.J., the son of Conrad and Helene Werner. Erich earned his undergraduate degree with concentrations in chemistry and philosophy from Colgate University, where he was on the wrestling and football teams. He went on to earn a Master of Divinity from Mount Airy Seminary and a Masters in Systematic Theology from Princeton University. He married Gail Henry on December 22, 1962 during a snowstorm, and they remained together for the next 57 years in loving matrimony. Erich had several careers in his lifetime: a Lutheran minister, a house painter, and for the past 4 decades, a financial advisor. The relationships that he developed in service to others meant the world to him. Erich and Gail attended Trinity United Methodist Church for several decades, where he was president of United Methodist Men and attended the Fishermen’s Sunday School class. He was known for his dynamic teaching style, frequently teaching lessons with costumes and props. He loved to sing and did so in harmony with Gail whenever he could. He remained active in sports such as volleyball, golf, and tennis until his later years and was a Gator fan through and through. Erich never met a dog that he didn’t like or heard a joke that he couldn’t retell. He was a trickster at cards and the game Joker Rules and enjoyed reading to and playing games with his children and beloved grandchildren. In addition to his parents, he was predeceased by his sister, Dorothy, and his brother, Conrad. Surviving in addition to his wife, Gail Henry Werner are his son Benjamin Werner; his daughter Rachel Werner Longfellow, her husband Chuck Longfellow, and grandchildren Danica and Ingrid Longfellow, Grace Williams (James) and great grandson Caden; daughter Katherine Werner; and daughter Erica Werner and spouse Karen Leichter. He also leaves behind his and Gail’s two dogs, Bentley and Snickers, who will forever miss him as well. A service of remembrance will be held at 2 pm on Thursday, May 21, 2020. It will be a small service for family members in order to maintain the necessary social distancing guidelines. The service will be live-streamed: In lieu of flowers, the family requests that donations be given to the Fisherman Class Mission Projects fund. Facebook Event Page: https://www.facebook.com/events/576699259922778/ Join Zoom Meeting https://zoom.us/j/3917927365?pwd=UksrVXBKejlYMm1objVkamdySmdCZz09 Meeting ID: 391 792 7365 Password: 2BT6mY

Douglas Erich Werner, age 82, passed into life eternal on Saturday, May 16, 2020. He was born May 24, 1937, in Plainfield, N.J., the son of Conrad and Helene Werner. Erich earned his undergraduate degree with concentrations in chemistry and... View Obituary & Service Information

The family of Douglas Erich Werner created this Life Tributes page to make it easy to share your memories.

Send flowers to the Werner family.