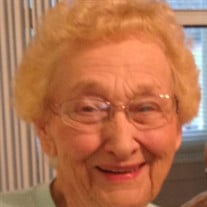 Doris A. Lacy, 91, of Gainesville, Florida was called home on Sunday, January 3, 2021, at Haven Hospice of Gainesville. Doris was born in Lawrence, Massachusetts on February 20, 1929, to Jane and Harry Houghton. She was the youngest of three children: however, as they grew older, she took on the responsibility of looking after them. Doris and their family moved to Miami, Florida in the 1950s, she met Richard, her loving husband of 54 years, while working for a local loan company. Doris then went on to work for the Public Safety Department (which is now known as the Miami-Dade Police Department), as clerical support until retiring in 1991. In 1996, Doris and Richard moved to Gainesville, Florida to be close to their daughter and her family. There, she enjoyed retirement, watching her grandchildren play sports and music. As the years passed, you could find Doris playing Nintendo and card games with them “she never let you win; you had to earn it.” She also loved teaching her granddaughter how to sew, cook, and crochet. Doris was an amazing seamstress, baker, and cook. She especially loved cooking English cuisine, the ancestry of her family. Doris was blessed to become a Great-grandmother to Brady (7), Brielle (4), and Liam (2). She loved playing card games and doing puzzles with them. Doris was a loving, caring, hard-working, and feisty woman, who had a sense of humor beyond words. She could always give you a good laugh, and she will always be known to her husband Richard as “Huggie.” Doris is survived by her husband Richard, daughter; Karen (Walt); grandchildren, Matthew (Laurie), Katelyn (Jeremy); great-grandchildren, Brady, Brielle, and Liam. Doris will be laid to rest in Miami, Florida alongside her brother and sister. In lieu of flowers, the family requests donations to be made in her name to Haven Hospice 4200 NW 90th Boulevard, Gainesville, FL. 32606.

Doris A. Lacy, 91, of Gainesville, Florida was called home on Sunday, January 3, 2021, at Haven Hospice of Gainesville. Doris was born in Lawrence, Massachusetts on February 20, 1929, to Jane and Harry Houghton. She was the youngest of three... View Obituary & Service Information

The family of Doris A. Lacy created this Life Tributes page to make it easy to share your memories.

Doris A. Lacy, 91, of Gainesville, Florida was called home on...

Send flowers to the Lacy family.