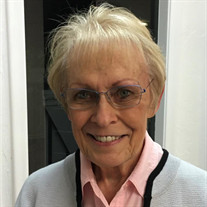 Dora Lee Bryan, 79, of Gainesville, FL went to join her Lord and Savior on April 28, 2021, after a brief illness. She was preceded in death by her parents James Henry Smith and Irma Margaretha Smith; her brothers James Paul, Raoul Derek, Carl Nelson, sister Nancy Carol Joseph, and husbands Donald Bowers and Roger P. Bryan. She is survived by her sister Susan Rose Manalli of Anderson, SC. She leaves behind many beloved nieces and nephews and those family members who were able to assist in her care: Dana Lyvers, James William (Marilyn), C. Thomas (Donna), and Dennis Bruce (Deborah) friends, Michael Wohl and Cindy Capen. She leaves behind the treasured members of the Subway Saints, employees at WG Johnson & Son, Inc., her Christian family at Trinity United Methodist Church, and all her dear friends who walked with her on her final steps. Dora Lee was born in Calumet County, WI on August 22, 1941, the youngest of six children. She had the distinction of being the last of all the Smith children in the 8th grade graduating class of the one-room Henry Ward Beecher School before it closed. She graduated from Appleton Senior High School, Appleton, WI in 1960. Soon after, she left the cold north and moved to Gainesville, Florida, where she took various jobs, including lifeguard and as an employee at the Sunland Training Center. She attended Alachua Junior College and then the University of Florida where she earned a Bachelor’s Degree in both Elementary and Special Education. She taught in the Gainesville School system for several years, but temporary ill health forced her to leave the career she loved. She was hired by WG Johnson & Son, Inc. where she worked for over forty years as Office Manager. Dora Lee loved Gainesville and was a protector and nurturer of local and migratory wild birds, as evidenced by her backyard bird sanctuary. She helped in identifying hummingbirds to be banded. Throughout her life she was an active member of many organizations, most prominently a volunteer for the Gainesville City Beautification Board dedicated to improving the environment and aesthetic concerns of the City. She was a member of Trinity United Methodist Church, having served in many leadership roles over the years. She provided testimonies in yearly Advent bulletins and participated in the annual art shows. She renewed herself in the Walk to Emmaus and also attained the Order of St. Luke. She will be remembered for her passion, outspoken dedication, and commitment to her faith. The family of Dora Lee Bryan wishes to express gratitude to the nursing and medical staff at Haven Hospice of Gainesville for the loving care she received. She asked to be cremated. Her ashes will be interred in The Garden of Trinity United Methodist Church. A memorial service will be held on Friday, May 14, 2021, at 11:00 a.m. at Trinity United Methodist Church, with reception following. Please register to attend the service and reception, using the following link: https://trinitygnv.ccbchurch.com/goto/forms/758/responses/new The family asks that COVID protocol be honored. In lieu of flowers, donations in her name can be given to any Trinity United Methodist Mission, 4000 NW 53rd Ave, Gainesville, FL 32653 or Habitat for Humanity, 2630 NW 41 St, Gainesville, FL 32606.

Dora Lee Bryan, 79, of Gainesville, FL went to join her Lord and Savior on April 28, 2021, after a brief illness. She was preceded in death by her parents James Henry Smith and Irma Margaretha Smith; her brothers James Paul, Raoul Derek, Carl... View Obituary & Service Information

The family of Dora Lee Bryan created this Life Tributes page to make it easy to share your memories.

Send flowers to the Bryan family.