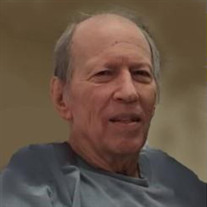 Donald Friberg DeKold of Gainesville, FL died Tuesday, February 8, 2022, following a long illness. Donald was born December 27, 1940, in Vero Beach, FL to the late Sebastian and Evelyn Friberg DeKold. Donald earned several college degrees including a B.A. in Psychology, a B.A. in Engineering, and a Master’s degree in Electrical Engineering. He started his career as an electrical engineer with General Dynamics. Later, he began working part-time at Santa Fe College as a professor of Electronics and Math, eventually accepting a full-time position. He mentored many students throughout his career, several that went on to become Electrical Engineers, some starting their own businesses, locally and abroad. He retired as a tenured professor from Santa Fe College after 30 dedicated years. During his career Don was asked by the University of FL Solar Park division to create an electronic device to control the water exchange in solar heating systems. Thanks to this opportunity, he established DeKoLabs, and manufactured and sold solar controllers. Several hundred were sold to businesses and private individuals. Donald and his wife, Lynda, celebrated 46 years of marriage. Together, they raised four children and served as Foster Parents to many others. They worked together as medical foster parents for 37 years. Donald’s other passions included gardening and raising numerous farm animals while the children were young. He also enjoyed his time as a “ham” while he was licensed by the FCC as an amateur radio operator. Donald was of the Methodist faith. Donald is survived by his loving wife, Lynda, and four children: Douglas W. Broward, Hillary L. (Mitchell) Webb, Erik F. (Cayley) DeKold, and Katye W. (Glen) Burns, 6 grandchildren, 2 nieces, 2 nephews, and many friends and colleagues.

The family of Donald Friberg DeKold created this Life Tributes page to make it easy to share your memories.

Send flowers to the DeKold family.