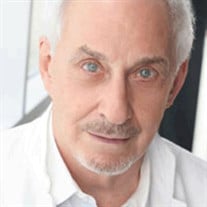 David Young – teacher, actor, director, husband, father, grandfather, mentor and friend – passed away on December 17, 2020 at Haven Hospice house. Born on May 1, 1928 in New York City, he is survived by his beloved wife and companion of 42 years, Elizabeth Adams, daughter Dr. Melissa Young, sister Ellen Ingersol, stepdaughter, Carol Chapin, stepson Eric Holm, daughter-in-law, Mary Young, grandchildren Lauren Thomas, Allison Young, Danielle Holm, Christine Holm, Matthew Holm; great grandchildren, Shawn, Naomi, and Natalie Thomas and Olivia Watson. He is preceded in death by son Michael Young, grandson David Benjamin Young, and stepson Richard Chapin. The family remains grateful to caregivers, Earlicia Young and the caring staff of Divine Prosperity Homemaker and Companion Services who have so faithfully and lovingly assisted Elizabeth in caring for David. Dr. Young’s commitment to theatre took him to stages and classrooms around the world. He played significant leadership roles in three phases of his professional career over seven decades, won significant awards, and leaves a legacy through his teaching and mentoring of actors, students and colleagues. He continued coaching others at the University of Florida beyond his 90th birthday—offering his insights on new plays and productions--whether sharing observations with actors and directors at work on the stage, in classroom discussions, over lunch, or a cup of tea. Dr. Young began his career at the Dramatic Workshop at the New School for Social Research in New York with the noted German director, Erwin Piscator. For many years he was a professional actor, appearing on NBC-TV's "Medallion Theatre" with Richard Kiley, Off-Broadway with Anne Meara, and on tour with Colleen Dewhurst. He also appeared in series for Public Television and on National Public Radio. He performed the play Love Letters, with colleague Judith Williams, in London, Winchester, Edinburgh, Moscow, Costa Rica, the Salzburg Festival in Austria, and a short tour of South Africa. He has directed more than 125 productions, including Off-Broadway and pre-Broadway tryouts. He also served as the artistic director of the Mark Twain Masquers, a civic theatre in Hartford, CT. He is the author of How to Direct A Musical and Audience Development and Services for the Community. In 1979, Dr. Young became the Producing Director of the American College Theater Festival at the John F. Kennedy Center for the Performing Arts, Washington, D.C.(KC/ACTF), a position he held for more than fifteen years. KC/ACTF is a national educational theatre program with more than 500 colleges and universities in its network, involving more than 18,000 college students, and reaching an audience of more than one million people annually. Dr. Young’s duties included budgeting, fund-raising, audience development, and producing and directing the National Festival, which was held each April at the Center. He recruited well-known national and international theatre artists for adjudication and guest appearances and planned and supervised all KC/ACTF awards. Dr. Young was a consultant for the Fund for Arts and Culture in Washington, DC. While in Ekaterinburg, Russia, he assisted in providing 35 theatre companies with information on promotion and audience development. After retirement from the Kennedy Center in 1993, Dr. Young joined the faculty at the University of Florida as the Graduate Research Professor in the School of Theatre and Dance, a position he held for more than twenty years. In addition to directing plays annually, he taught courses in directing, acting, the creative process, and playwriting. He continued teaching as Professor Emeritus until Fall 2018. His lifelong commitment to the theatre has been recognized through significant awards including, the 2012 Kennedy Center National Partner Award for Lifelong Service to the Theater; election to the prestigious College of Fellows of the American Theatre; and the American Association of Community Theatre National Patrons Award. Dr. Young has taught classes in directing, acting and musical theatre in the U.S., Brazil, the People's Republic of China, Senegal, and Greece and has been a guest lecturer for the Smithsonian Institution. Additionally, he has been a lecturer at the American Association of State Colleges and Universities and a judge for the National Society of Arts and Letters. He was a founding member of the Helen Hayes Awards in Washington, D.C., served as artistic theatre adviser for the Presidential Scholars in the Arts, and is listed in Who's Who in American Theatre. He was a member of Actors Equity Association, the Society of Stage Directors and Choreographers, and the Association for Theatre in Higher Education. He was also a past president of the American Community Theatre Association (now AACT). David was known for his eagerness to travel whenever possible to see productions of plays around the world and he was among the few people who have seen a live production of every one of William Shakespeare’s plays. There is no more fitting tribute than one afforded Hamlet: “Good-night, sweet prince; And flights of angels sing thee to thy rest.” No service is currently planned, but when the Covid-19 virus subsides, a Celebration of Life will be scheduled. In lieu of flowers, memorial donations may be made in his memory to the University of Florida School of Theatre and Dance.

David Young &#8211; teacher, actor, director, husband, father, grandfather, mentor and friend &#8211; passed away on December 17, 2020 at Haven Hospice house. Born on May 1, 1928 in New York City, he is survived by his beloved wife and companion... View Obituary & Service Information

The family of David Young created this Life Tributes page to make it easy to share your memories.

Send flowers to the Young family.