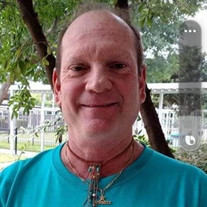 On September 25 2021 at 5 am, David Dooley Dick passed away due to complications of covid. David was born in Gainesville on September 22, 1959. He was 62. He was preceded by his father, Ron Dick Senior and most recently his mother, Vivian Dick. He is survived by his husband Steve Bates, his brother Ron Dick Jr and his wife Dianne Voitle, and his brother Marcus Dooley and his wife Robin Dooley. David always had a way of doing what he wanted, even right to the end. He knew that he probably would not make it out of the hospital and told several people so. He made the decision when to be intubated and when he was going to move onto be with his mother and father. He met his husband Steve in 1994 and they both cherished each other. In 2015 it was voted to legalize gay marriage. He called Steve crying saying we can now legally get married. On March 1, 2015 they were married. One of the last things he told Steve was “we were great together, we showed them all how it should be.” David was genuine in helping others. He didn’t care about race or lifestyle or any of that. If he could help, he did. He had several homeless friends that he would open his heart to, as well as his house. He did things David’s way in life and with people. He was a unique angel here on earth and will be a shinier angel in the heavens. David was an avid Gator fan but a bigger Dallas Cowboy fan. In fact he would tell people that he joined the air force to be stationed in Dallas. In grade school he told his teacher that his name was Dallas and even managed to have his high school diploma insert Dallas as his middle name. David’s zest for life and his infectious laughter was evident to all and he will be remembered fondly by all of us that were lucky enough to know him. David will be buried in the Prairie Creek Conservation Cemetery on October 10th. There will be a celebratory wake for him there at 1:30 on that day. In lieu of flowers please make a small donation in David’s memory to your favorite charity.

On September 25 2021 at 5 am, David Dooley Dick passed away due to complications of covid. David was born in Gainesville on September 22, 1959. He was 62. He was preceded by his father, Ron Dick Senior and most recently his mother, Vivian Dick.... View Obituary & Service Information

The family of David Dooley Dick created this Life Tributes page to make it easy to share your memories.

Send flowers to the Dick family.