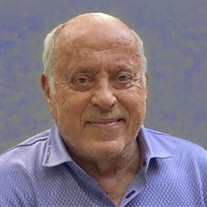 David F. Cohen, 86, Passed away peacefully Tuesday, October 20th at North Florida Regional Medical Center. The ultimate sports and gator fan, He is survived by his wife of 39 years, Donna, His beloved children, Gregg Cohen(Amy), Heidi Cohen Brugliera (Gary), Grandchildren, Jessica and Billy and their significant others Sam and Lindsey, his former wife and good friend, Marilyn Miller, his sisters in law Roz and Linda, his brother in law, Scott Pauquette (CINDY), their children Jeremy (Charlie) Jonathan (Cat and daughter Lili), Aimee and Amanda and several nieces, nephews, and their children and mostly his beloved bichon Coco and Cami and granddog Polo. A graduate of Syracuse University, he then worked in his Family's business (THE FASHION SHOP) OF 14 women's clothing stores in upstate New York and Vermont before moving to Florida in 1979. He then opened several women's discount clothing stores throughout Florida and North Carolina (The precursor to outlet malls)and after selling them he became a very successful realtor for 25 years his quick wit and comebacks and his innate love of people an integral part of his success. A 6-time marathoner (his first one at 60) he then segued into 5 days a week spin class at GHFC having the distinction of being the spin class darling as well as the oldest ones in the class!!!! In his very short retirement years, he became a volunteer at the UF Small Animal Hospital and then the Alachua County Humane Society. A small graveside service will be held at B'nai Israel Cemetery on Friday, October 23rd at 2:00 p.m. and for those who wish, the zoom link is as follows; meeting ID 893 9579 7287 Passcode 1818 Avid animal lover, please make any donations to the ALACHUA COUNTY HUMANE SOCIETY 4205 NW 6th street Gainesville, Florida 32609.

The family of David Franklin Cohen created this Life Tributes page to make it easy to share your memories.

Send flowers to the Cohen family.