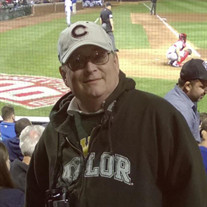 Danny Guy Ball passed away in Tampa, Florida on May 10, 2020, at Moffitt Cancer Center. Danny was predeceased by his parents, Guy and Billie Jean Ball; his paternal grandparents, John and Jesse Ball; and his maternal grandparents, James and Helen Wilkinson. He is survived by his wife, Annette Brashear Ball; his two brothers, Jim Ball (Kara) and Joe Ball (Johnny Bennett); his nephews, Michael Ball (Cara), Stephen Ball (Brooke), and Ben Brashear (Christine); his nieces, Amelia Lindsey (Kip), Austen Herron, and Wilder Herron; and his in-laws, the Brashear family, who embraced him as their own. Danny was born in McComb, Mississippi on November 22, 1957. He claimed to be a child of the south because he had lived in five southern states by the time he was 16. He graduated from Berkner High School (Richardson, Texas) in 1976 and Baylor University (Waco, Texas) in 1980, where he met his future wife, Annette, during classes at Baylor University Theater. After graduating, Danny and Annette were married and moved to Gainesville, where Danny attended the School of Journalism at the University of Florida. They moved to Tampa in 1984, where his love of the theater, music, books, movies, and writing followed him throughout his career and personal life. Danny also loved all creatures great and small, particularly the “cat of his life,” Uther, and all the pets he shared his home with over the years. Danny was a man of many interests including his love of sports. He was proud he attended an Olympics, a practice session at the Masters Golf Tournament, a World Series Game, and watched the Lady Bears win at the 2019 Women’s Final Four Basketball Tournament. He enjoyed flyfishing and taking nature walks at the lake. He loved to read a good book as much as he loved to tell a corny joke, and music brought him great joy. His family and friends are happy to finally be together to share in their memories of Danny; he is missed every day. A memorial service will take place on November 26, 2021, at 1:00 p.m. at the First Presbyterian Church Iona Chapel followed by burial at Evergreen Cemetery. In lieu of flowers, please donate to the Humane Society of Tampa Bay at www.humanesocietytampa.org.

The family of Danny Guy Ball created this Life Tributes page to make it easy to share your memories.

Send flowers to the Ball family.