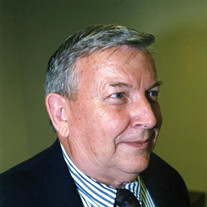 Dailey Julius Burch, 87, passed away at his home on Monday, June 22, 2020 in Micanopy, Florida. Dailey was born on September 19, 1932 near Tacoma, Florida to the late Wallace and Martha Burch. He graduated from P.K. Yonge High School and served four years in the Air Force, during the Korean war. Preceding him in death was his wife of 36 years, Alice Burch, and brothers Wallace, James, Elmer, and Lester. He leaves behind his devoted wife of 26 years, Barbara Kate Douglas Burch; children, Joani Hesters, Lisa Burch, Cristie Sapp, Jerry Johnson, and Jennifer Johnson Joseph; grandchildren, Matthew Hesters, Ryan Hesters, Sarah Davis, Laura Folsom, Michele McLeod, Courtney Sapp, Austin Joseph, Walker Johnson, Ashleigh Joseph, and Anna Joseph; and great-grandchildren Ginger Dumas, Megan Horne, Brooke Davis, Kayley McLeod, Riley McLeod, Jeremiah Folsom, and Faith Folsom, as well as many loving family members and friends. He loved his family, especially his grandchildren and great-grandchildren, gathering frequently for family meals, holidays, birthdays, and graduations. He retired from the University of Florida after 30 years of service as an Engineer Machinist and enjoyed collaborating with students from all over the world. After retirement, he gave his time to local families helping tend their gardens and helping others curate one-of-a-kind treasures for their antique businesses. He and Kate also joined Gideons International, where he distributed bibles at colleges and hotels, as well as through their prison ministry. Although he was a lifelong resident of Alachua County, he had a love of travel, both in the United States and abroad. While serving in the Air Force, he visited numerous countries, including Korea, Japan, Turkey, Italy, Germany, and Austria. In more recent years, he and Kate traveled to our western states. They also enjoyed traveling with their brothers and sister in-laws to the Blue Ridge Mountains. One of his favorite memories was a visit to Berchtesgaden, near Salzburg, Austria as part of a religious retreat. While he was there, he was learned about the 18th century persecution of local Protestants, which touched and inspired him. He was very proud to be an American, especially because of the religious freedoms we were founded on. A member of Micanopy Baptist Church, Dailey’s faith was central to everything he did, missing no opportunity to testify about God’s love in his life and to share the Good News of salvation through Jesus Christ. He never met a stranger, and wherever he went, his life was a witness of Christian love. He carried a real burden for helping the lost, and would often say, “My job on Earth is to keep people out of hell” Visitation will be held Thursday, June 25th from 5:00pm – 7:00pm at Williams-Thomas Funeral Home in Gainesville. The funeral will be held on Friday June 26th at 11:00am at Flemington Baptist Church. The Interment will be at Millwood Cemetery in Reddick. Services are being officiated by Pastors Victor Nickerson and Troy Turner. For those who wish to make a donation in Dailey’s memory, please visit https://www.gideons.org/donate.

Dailey Julius Burch, 87, passed away at his home on Monday, June 22, 2020 in Micanopy, Florida. Dailey was born on September 19, 1932 near Tacoma, Florida to the late Wallace and Martha Burch. He graduated from P.K. Yonge High School and... View Obituary & Service Information

The family of Dailey Julius Burch created this Life Tributes page to make it easy to share your memories.

Dailey Julius Burch, 87, passed away at his home on Monday, June...

Send flowers to the Burch family.