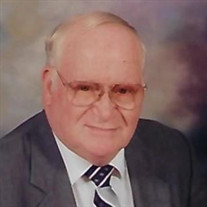 Chester Dallas Eastman, 86, longtime resident of Gainesville, Florida, died Sunday, August 1, 2021 at his home, following a long illness. Mr. Eastman was born in Ansted, West Virginia on August 8, 1934, to the late Glen Ray and Armenta Eastman. He was veteran of the United States Air Force. Mr. Eastman came to Gainesville in the early 1960’s and began a long career with the University of Florida as a supervisor of the machine shop, until his retirement in the late 1990’s. He loved to build and tinker with things, he loved fishing with his family and was a long-time member of the United Pentecostal Church of Gainesville. Mr. Eastman was preceded in death by his twin brother, Lester, and brothers Clarence, Richard, and Keith Eastman. He is survived by his wife of 61 years, Sara Eastman; a son, Gregory Ray Eastman and a daughter, Angela Helen Eastman, both of Gainesville; two sisters, Ila Mae Wyatt, of Atlanta, Ga. And Evelyn Arthur, of Interlachen; one brother, David (Sandy) Eastman of Titusville; two grandchildren, Geron Michael Eastman, and Kristen Elise Eastman, both of Tallahassee; two great grandchildren, Alexander Taylor and Dallas Ray Taylor and baby Aynsleigh, on the way, and by his beloved dog, Jazzie. A memorial service will be held Saturday, August 21, 2021 at 12:00 p.m. at the Pentecostals of Gainesville, 8105 NW 23rd Ave.

The family of Chester Dallas Eastman created this Life Tributes page to make it easy to share your memories.

Send flowers to the Eastman family.