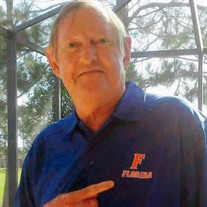 Mr. Charles D. “Chuck” Sapp, 73, lifelong resident of Gainesville, Florida, died Thursday, February 25, 2021, at his home, following a long illness. Mr. Sapp was born in Gainesville on September 15, 1947, to the late Robert Montgomery and Juanita Sapp. He attended Gainesville High School, and then graduated from Cocoa High School, Class of 1965. After high school, he joined the U. S. Army and served in the 2nd Armored Division “Hell on Wheels”. After his time in the Army, he attended and graduated from the University of Florida with a bachelor’s degree in civil engineering. Chuck then began a long career as a land surveyor, like his father before him. His career as a professional land surveyor lasted over 50 years until his health forced his retirement. In his free time, Chuck enjoyed playing golf and softball, fishing, riding his Harley-Davidson, and watching Florida Gator football. He spent many years coaching little league and high school baseball, positively impacting so many young men in the process. He is survived by his wife, Susan Shannon-Sapp; one son, Robbie (Christina) Sapp, of Gainesville; one daughter, Karen (Donovan) Sapp, of Portland, OR, step-son, Nate (Karrie) Shannon, of Ocala, and step-daughter, Sandra (Brandon) Fast, of Waukee, IA; three sisters, Jean (Tom) Worthington, Kathy Sapp and Lori (Jimmy) White; nine grandchildren, Bailey Sapp; Cameron, Ali, Kaelen and Hudson Shannon, Emilie, Kacie, and Daniel Kosbab and Bryson Fast. Graveside funeral services will be held on Monday, March 1, 2021, at 2:00 P. M., in the Memorial Park Cemetery Central, 4100 NW 39th Avenue, Gainesville. In lieu of flowers, the family asks that you donate to Fishin’ for Vision; a tournament fishing outreach to help raise money for the Florida KidSight Foundation, either through their website at; www.fishinforvision.com or mail to Fishin’ for Vision, 322 Riverside Drive, Steinhatchee, FL 32359.

The family of Mr. Charles D. "Chuck" Sapp created this Life Tributes page to make it easy to share your memories.

Send flowers to the Sapp family.