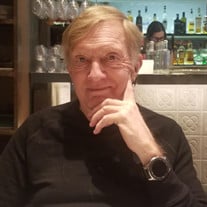 Dr. Charles Joseph Kibert passed away unexpectedly in Gainesville, FL on January 25, 2021, at age 73. For more than 30 years, Dr. Kibert was the University of Florida College of Design, Construction and Planning’s Holland Professor in the M.E. Rinker, Sr. School of Construction Management and Director of the Powell Center for Construction and Environment. He was responsible for the design and construction of Rinker Hall, the first green building of almost 80 high-performance buildings on the University of Florida campus. He was also the co-founder and chairman of the Cross Creek Initiative, a non-profit/university joint venture seeking to implement sustainability principles in construction. Dr. Kibert was also recently elected as the Chair of the Green Building Initiative (GBI) Board of Directors. Dr. Kibert inspired countless people around the globe to pursue sustainable construction. Dr. Kibert published over 140 papers and books on construction, the environment, and related issues. His book, Sustainable Construction: Green Building Design and Delivery (currently in 4th Edition), is a leading reference book. Charles was born in Scranton, PA to Mary (Mattes) and Charles Kibert. He was the eldest of six children. Charles grew up in an orphanage, Our Lady of Fatima Institute in Elmhurst, PA from the age of 4. Charles started his academic career at the U.S. Military Academy at West Point (1965-69). Upon graduation, he was commissioned as an Infantry Second Lieutenant in the U.S. Army and served in the Vietnam conflict as an Airborne Ranger. After completing his active-duty obligation, he continued to serve in U.S. Army Reserves as a Special Forces Officer retiring as a Colonel. Charles continued his studies earning a Master of Science in Nuclear Engineering at Carnegie Mellon University, and earned his Ph.D. from the University of South Florida in Mechanical Engineering. Charles was passionate about music and the community. He was an avid guitar player. He was instrumental in the process of bringing the Cotton Club, Gainesville’s African American community landmark that hosted the likes of James Brown, Ray Charles, and B.B. King, back to life. You may not expect a former Green Beret to be patient, gentle, and kind. But he was that in spades. If anyone needed help, Charles was there. A stranger on the street always had a hand up from him. He was always happy to counsel anyone needing advice on their studies, life, or the universe in general. Charles had a wicked sense of humor and delighted in practical jokes sometimes to the chagrin of his family, friends, and coworkers. You knew to listen carefully when there was a wry grin on his face and get ready to belly laugh when he had a big grin. As with many veterans, athleticism was very important to Charles. Fencing started off as a way to get off campus at West Point and turned into a lifelong passion. He was an avid runner -- famously outrunning the day after his knee surgery. He also loved bike riding -- whether a road bike or a motorcycle. However, his greatest love was his family -- Charles is survived by his wife, Patricia Kibert (Wobbe), and his children, Charlotte Kibert and her wife, Elizabeth Brackman Kibert, Nicole Kibert Basler and her husband Arthur Kibert Basler, Alina Victoria Kibert, and granddaughters, Arwen Ann and Margot Josephine Kibert Basler. He is also survived by his siblings, Leonard Kibert, Stashu Kybartas and his husband Robert Colucci, and Annette Kibert. His brothers Ronald and William predeceased him and are no doubt delighted to have their big brother with them again. Charles is also survived by beloved nieces and nephews, Jesse, Hallie, Daniel, Brynn, Evan, Andrew, and Matthew. The family will hold a private interment at The Florida National Cemetery and ask that any donations made go to the Dr. Charles Kibert Legacy Fund at https://www.uff.ufl.edu/giving-opportunities/025437-dr-charles-kibert-legacy-fund/. A Celebration of Life will be planned at a later date.

Dr. Charles Joseph Kibert passed away unexpectedly in Gainesville, FL on January 25, 2021, at age 73. For more than 30 years, Dr. Kibert was the University of Florida College of Design, Construction and Planning&#8217;s Holland Professor in... View Obituary & Service Information

The family of Dr. Charles Joseph Kibert created this Life Tributes page to make it easy to share your memories.

Send flowers to the Kibert family.