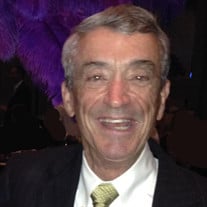 Dr. Charles Edward Graper, age 76 of Newberry, Florida passed away Monday, February 1, 2021. He was born June 17, 1944 in Bronx, New York to Charles and Margaret Ehring Graper. Dr. Graper grew up in Bethesda Home for Boys in Savannah, Georgia. He graduated from Benedictine Military School in Savannah. He attended University of Florida and was a member of the UF swimming and diving team, Kappa Sigma fraternity and Gator Letterman’s Club. He graduated from Emory Dental School, Hahnemann (Drexel) University School of Medicine in Philadelphia, PA. He did a residency at University of Pennsylvania and at the Orlando Regional Medical Center. He was a Fellow of the American College of Surgeons, past president of Florida Association of Cosmetic Surgery, past chairman of the Examining Board of Cosmetic Surgery, a member of American Board of Oral and Maxillofacial Surgery, American Association of Maxillofacial Surgeons, a past member of American Association of Cosmetic Surgery, member of the American Board of Dental Anesthesiology, American Medical Association. Dr. Graper was a former member of the staff of Lake City Medical Center, former member of the staff of Lake Shore hospital, former associate professor at the University of Miami, former associate professor at the University of Georgia. Dr. Graper had offices in Gainesville, Lake City and Georgia. He did several mission trips to Guatemala and Haiti doing cleft palate surgeries. He was a private pilot. He received the Rotary’s Paul Harris Fellow Award for his volunteer work. He volunteered his medical services through the Alachua County Medical Association. Dr. Graper has lectured all over the country and has mentored many students over the years. He received the Florida Sheriff’s Award. He is survived by his wife of 53 years, Beverly Vernacchio Graper; his son Marcus Graper and wife Yanning; sister Nancy O’Toole; brothers Gregory Graper and John Graper; Grandchildren Olivia and Clara Graper. He is preceded in death by his son, Dr. David Graper. A celebration of Dr. Graper’s life will be held at a later date.

The family of Dr. Charles Edward Graper created this Life Tributes page to make it easy to share your memories.

Send flowers to the Graper family.