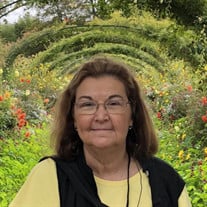 With an extremely heavy heart, we announce the passing of our beloved angel Carolyn Hogg LaRue of Gainesville, Florida, on February 28, 2022. Carolyn is survived by her loving husband Dr. Raymond Abram LaRue III. They celebrated 35 years of marriage in June 2021. She adored her only son; Raymond James LaRue of Gainesville, Florida. She was predeceased by her father, James Hogg, and her father-in-law, Dr. Raymond LaRue II, and by her dear brothers-in-law David LaRue and Scott LaRue. Carolyn is survived by her cherished mother Lois Clark Hogg, her brother Jim Hogg, sister-in-law Chris Hogg, niece Reese Hogg, and nephew James Bradley Hogg. She is also survived by her sister, Jennie Hogg Anderson, brother-in-law Gary Anderson and nephew, Burke Anderson, and his wife (Kristina) Kates Anderson. Carolyn is survived by her devoted mother-in-law: Jeanne LaRue, brothers-in-law, Todd (wife Debbie) LaRue, Eric (wife Kris) LaRue, Mark LaRue, Sisters-in-law Susanne LaRue (husband Mark) Lewicki, Beth LaRue (husband Michael) Sasso, Stepdaughter, Heather LaRue (husband Brent) Ward, Stepson, Matthew (wife April) LaRue, Grandchildren: Madeline LaRue and Hannah LaRue. Also, she will be remembered fondly and greatly missed by her many nieces and nephews. Carolyn was born in Haines City, Florida, where she attended and graduated from Haines City High School, Class of 1975. Then she graduated from the University of Alabama School of Nursing as an RN in 1979. What followed was a career as a remarkable Emergency Room triage nurse and infectious disease specialist. Carolyn’s interests were varied and wide-ranging. She enjoyed gardening, training her two rescue dogs, Happy and Violet, planning and traveling to famous destinations in the US and Europe. She was a strong advocate for organizations whose mission was to rescue and place small animals in loving homes. Her kindness and generosity to loved ones, friends, and strangers alike, was legendary. Everyone was honored by her intelligence, caring nature, and humor. Her emails were memorable because they were personally uplifting and kind. Whatever was going on in her families’ lives; weddings, birthdays, or holidays, they were lucky enough to receive a gift box of goodies or customized treats from Carolyn. Carolyn was a devout Christian, who attended Trinity United Methodist Church in Gainesville. She worshiped and loved the Lord and shared her faith with everyone she met. She was a beautiful angel on earth who was loved by many whose lives were enriched by her presence. On March 10th, Carolyn’s Memorial service will be held at 11:00 am, at the Trinity United Methodist Church, 4000 NW 53rd Ave, Gainesville, FL 32653. Interment will be immediately after the Memorial Service at Forest Meadows, address 4100 NW 39th Avenue in Gainesville, Florida 32606. In lieu of flowers, please donate to the animal rescue charity of your choice, in memory of Carolyn Hogg LaRue.

With an extremely heavy heart, we announce the passing of our beloved angel Carolyn Hogg LaRue of Gainesville, Florida, on February 28, 2022. Carolyn is survived by her loving husband Dr. Raymond Abram LaRue III. They celebrated 35 years of... View Obituary & Service Information

The family of Carolyn Hogg LaRue created this Life Tributes page to make it easy to share your memories.

With an extremely heavy heart, we announce the passing of our...

Send flowers to the LaRue family.