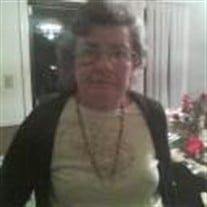 On Tuesday, July 13, 2021, Carolyn May Hunt wife, mother of four, grandmother of five, great grandmother of five, passed away at the age of 79. Carolyn was born in New Castle, Pennsylvania on December 14, 1942, to parents Clarence and Coral Titus. After graduating from Gainesville High School in 1958 she married Army Private First Class Gary Lee Hunt on December 22nd, 1965. She then gave birth to four daughters Suanne, Barbara, Teresa, and Emily. Having traveled the majority of the US, Okinawa, and beyond Carolyn was more than well-traveled. She enjoyed puzzles, crossword puzzles, sewing cross stitching, and almost any craft she could get her hands on. She was well known for her kind spirit and her gentle hands. Carolyn is preceded in death by her mother and father, Clarence and Coral Titus, brothers John Titus and Glenn Titus, her oldest daughter Suanne Hunt-West, and her youngest daughter Emily Hunt. Carolyn is survived by her husband, Gary Hunt, two middle daughters Barbara White, Teresa Roberts, her five grandchildren, Rachel White, Deanna White, Gregory West, Sharry White, and Andrew Johns, and her five great-grandchildren, all of which sorely miss her. Her funeral will be held on Friday, July 23 at Saint Patrick’s Catholic Church in Gainesville, FL at 1:30.

The family of Carolyn Hunt created this Life Tributes page to make it easy to share your memories.

Send flowers to the Hunt family.