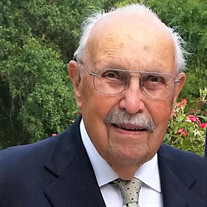 Carma Drury 12/9/1911 to 8/25/2021 It is with immense sadness that the family of Carma Drury, age 109 years and 8 months, announce his passing on Thursday, August 26, 2021. Carma was born in 1911 on a farm in Ozark, Missouri, although the exact date was under dispute. As it happened, it was a dark and stormy night when the traveling country doctor showed up to deliver both Carma and his twin sister Cuma. Subsequently, after a number of days of taking care of other patients, the doctor returned to his office to fill out the birth certificates. His recollection was that it was a sunny day on the 9th of December 1911 whereas, Carma and Cuma’s mother told them it was the 5th of December. After many years of celebrating birthdays on the 5th they had to acknowledge, due to the birth certificate, it was the 9th. Ever since they began celebrating on the 5th and continued until the 9th. It was with a great deal of fanfare that they both celebrated their 100th birthdays together on December 4th, 2011. The Drury family moved from Missouri to Central California (Clovis) at the behest of Carma’s grandfather Frank who had settled in the rural area as a real estate broker to be near his daughter who had married a landowner in the area. Carma and Cuma were 8 years old at the time and spent much of their youth growing up and schooling in Clovis and Fresno. The family consisted of Clayton (father), Lilly-May (mother), Mildred (surviving twin), Frank (sibling – died in a swimming accident), Carma, and Cuma. Grandfather Frank was later Grand Marshal of the Clovis Day Parade, riding his horse Roney at the age of 99 years. He died at 100 years and 9 months and was known as the Grand Old Man of Clovis. Carma was the first in his family to graduate from college (Fresno State) and on June 20th, 1936 married a fellow graduate, Alice Iantha Zollinger of Fresno. They made their first home in nearby Madera where Carma was able to get one of the scarce jobs available with the Pacific Gas & Electric company (PG&E). Although unusual today, Carma spent the next 40 years employed by PG&E becoming the “GO-TO Guy” all over the San Joaquin Valley. During WWII, his position was declared exempt from active military duty, but he was active in the Naval Reserve. Carma and Alice raised a family of 3 sons: Stanley, Kenneth, and Keith (deceased). In 1968, Carma and Alice moved to the next town up the valley, Merced, where Carma continued to head the gas utility section for PG&E. Unfortunately, Alice died of cancer in 1980. Carma remarried 3 years later in Merced to Elizabeth (Betty) Hamilton. They were both active in the local Baptist church and traveled extensively using their 5th wheel half-ton truck unit. They attended family gatherings and reunions for both the Hamilton and Drury families. His hobbies included: watch repair as well as building Grandfather and Grandmother clocks for family members. In all, he built 13 clocks using his large array of electric power tools accumulated over many years. Wherever he went he made sure there was a large workspace for his tools and construction projects. At 101 years old he designed, calculated, framed, and built a concrete half-round step outside double French doors on a pool lanai so that water drained away from the doors into a drainage system. Until age 106 he was still looking for projects and things to fix. Relaxation for him was looking for the next thing to make or fix. After 35 years of marriage, Betty past-away following an extended stay in a nursing home, and Carma went to live in an assisted living facility in Grass Valley near his son Stan’s home in the Sierra Nevada mountains. Feeling restless in his confines, Carma decided to move to Gainesville, Florida to live with his son Kenneth’s family. Carma loved the old Oaks in and around Gainesville and took daily walks among them with his ever-ready trekking poles. He also enjoyed sitting and contemplating in the UF Baughman Center reflecting out into the view of Lake Alice. He participated in the Centenarian Study sponsored by the UF Institute on Aging ( Faculty » Institute on Aging Department of Aging & Geriatric Research » College of Medicine » University of Florida (ufl.edu)) and was the oldest person to visit with faculty in the Institute at 108 years of age. He just missed being inducted into the Super-Centenarian Club by 3 months 15 days. He is survived by sons Stanley of Grass Valley, CA (wife: Donna, sons: Ian (deceased), Aaron, daughter: Desiree); Kenneth of Gainesville, FL (wife: Sandra, daughters: Allison Iuculano, (Nicholas Iuculano), and Vanessa); Daughter-in-law: Carolene Drury (Keith) of Merced, CA; Grandson: Timothy Drury of Merced, CA: (wife: Karly, daughter: Dorothy, sons: Clayton and Everett); Grand daughter-in-law: Jennifer Worsley of Sacramento, CA. (daughter: Claire Drury) Carma’s remains will be flown back to California for burial at a date TBD. In lieu of flowers or other remembrances please consider a gift to UF Institute on Aging: The Centenarian Study. Institute on Aging Fund - University of Florida Advancement (ufl.edu) or Haven Hospice.

The family of Carma Drury created this Life Tributes page to make it easy to share your memories.

It is with immense sadness...

Send flowers to the Drury family.