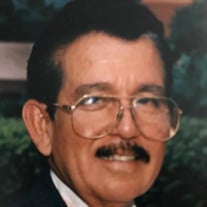 Mr. Carlos Perales-Reyes, 87, of Alachua, Florida, died Monday, November 30, 2020, at Shands Hospital, Gainesville, Florida, following a long illness. Mr. Perales was born in Bronx, New York on June 19, 1933; but soon after moved with his family to Puerto Rico where he was raised and educated. As a teenager, he joined the U. S. Army, and was a decorated combat veteran of the Korean War; and after his discharge was a longtime member of the National Guard. He received his bachelor’s degree from the University of Puerto Rico and a master’s degree from N. Y. U. Mr. Perales loved New York City, and he was a lifelong Yankees fan. He worked, first as a schoolteacher and later as a secondary school administrator, until his retirement. He enjoyed woodworking and spending time with his family and grandchildren. He is survived by his wife of 59 years, Neredia Maldanado-Perales, of Alachua; an older brother, one daughter, Lynnette Perales-Magrill (Kyle) of Gainesville; three grandchildren, Jesse Massas-Perales, Andrew Magrill & Karyn Magrill. A celebration of Mr. Perales’ life will be held on Saturday, December 5, 2020, at 3:00 P. M., in the chapel of Williams-Thomas Funeral Home Westarea, 823 NW 143rd St., Newberry, with Rev. David Chauncey, officiating. Interment with military honors will be held in Florida National Cemetery, at a later date.

The family of Mr. Carlos Perales-Reyes created this Life Tributes page to make it easy to share your memories.

Send flowers to the Perales-Reyes family.