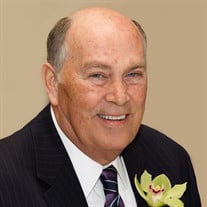 Bruce died peacefully in his sleep surrounded by his "beloved" wife, "favorite" son, and "favorite" daughter on August 4, 2020. Born in Easton, Pennsylvania on August 12, 1944 to Dr. Rayner Selby and Mary Alice Johnson, Bruce was a devoted husband, father, and community member. Johnson attended Mount Pleasant HS in Wilmington, Delaware and grew up playing golf at DuPont Country Club. He later played golf at the University of Delaware and became a Staff Sergeant in the Army's 3rd Infantry. Bruce was stationed in Germany where he met his first wife, Helga Barton. After his honorable discharge, Bruce and Helga settled in Gainesville where they bore their son, Robert Andrew. Divorced but remaining amicable, Helga moved to Seattle and Bruce remarried to Suzanne Elaine on February 11, 1978. They bore a daughter, Jennifer Lynn, in Homestead where Bruce was a retail store manager. Bruce and family moved throughout Florida as Johnson continued receiving corporate promotions. In all, Johnson served as a retail store manager for 22 years and was also an active member of the Kiwanis, Elks, and VFW. Bruce retired from retail management and used his entrepreneurial and management skills to successfully run his own golf store in Brooksville for five years. As his parents aged, Bruce and Sue moved back to Gainesville to be closer to them. He continued playing golf and worked in real estate before officially retiring in March 2009. Bruce spent his retirement years playing golf with close friends at Candler Hills CC in Ocala and continued serving his community as a generous philanthropist. Johnson is preceded in death by his parents Dr. Rayner Selby and Mary Alice, and survived by his wife Suzanne Elaine, brother Dr. Robert Merle and wife Annette, son Robert Andrew and wife Aimee, daughter Jennifer Lynn Orth and husband Ryan, and five granddaughters Caitlyn, Marissa, Claire, Mikayla, and Taylor. The family will have its own private ceremony, and his ashes will be spread at an undisclosed location. In lieu of gifts or flowers, the family requests any donations be made to the Marion County Humane Society. Arrangements are made by Williams-Thomas Funeral Home in Gainesville.

Bruce died peacefully in his sleep surrounded by his "beloved" wife, "favorite" son, and "favorite" daughter on August 4, 2020. Born in Easton, Pennsylvania on August 12, 1944 to Dr. Rayner Selby and Mary Alice Johnson, Bruce was a devoted... View Obituary & Service Information

The family of Bruce Rayner Johnson created this Life Tributes page to make it easy to share your memories.

Bruce died peacefully in his sleep surrounded by his &quot;beloved&quot;...

Send flowers to the Johnson family.