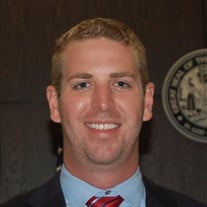 Austin Lawrence Cox passed away on Friday, February 19, 2021, at the age of 30. Austin was born on June 3, 1990, at Eglin Air Force Base to his loving parents Bill and Paula Cox. Austin was the type of person who excelled at anything he put his mind to. From the time that Austin was young, he would tell his mother that he wanted to be a lawyer, His determination towards that goal never ceased to waver. Austin graduated from the University of South Florida with two Bachelor degrees, and he went onto receive his Juris Doctor at Florida Coastal School of Law. Austin passed the Florida Bar examination on his first attempt and went on to become an Assistant State Attorney serving Pinellas County, Sixth Circuit for 4 years then transferring to Alachua County Eighth Circuit. Austin loved what he was doing and had aspirations of becoming a Judge. Austin is survived by his fiancé Neil Keller, his parents, Bill and Paula Cox, and his brother, Andrew Cox. Austin is also survived by his grandmother, Glenna Staples, and many amazing aunts, uncles, cousins, and many friends. Austin knew and touched the lives of many people – friends, coworkers, and clients – who loved and adored him very deeply. He even melted the hearts of those who cared for him before he passed. He always had a charisma that charmed anyone that crossed his path, and those that met him said that he was kind and had a big heart for others, which showed through his passion to help other people. He had a kind and compassionate heart and was always there for his loved ones and friends. He was bright-minded and spirited. He was all the things that he wanted to be and more. He lived an amazing and fulfilling life; he traveled to the places he always wanted to see, met many along his journey, and achieved beyond his hopes and dreams. The legacy that he left will be held and cherished within the hearts of so many people, forever and always, but we know he is somewhere driving in his Jeep, the windows down, and Levi riding shotgun. A celebration of life will be held on Wednesday, February 24, 2021, at 11:00, am in the WILLIAMS-THOMAS FUNERAL HOME Chapel WESTAREA 823 N.W. 143rd street Newberry, Fl. with Pastor Bob Pugh officiating. The family will receive friends from 10:00 a.m to 11:00 a.m. In lieu of flowers, donations may be made in his memory to www.boxerarc.org

Austin Lawrence Cox passed away on Friday, February 19, 2021, at the age of 30. Austin was born on June 3, 1990, at Eglin Air Force Base to his loving parents Bill and Paula Cox. Austin was the type of person who excelled at anything he put... View Obituary & Service Information

The family of Austin Lawrence Cox created this Life Tributes page to make it easy to share your memories.

Send flowers to the Cox family.