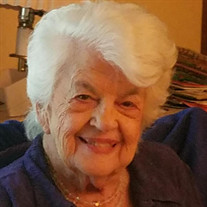 Anna Jane More Cicio, age 94, passed away peacefully in her home in Gainesville, FL on Thursday, March 11, 2021 while being tended to by her daughter-in-law, Karen Cicio, and a hospice nurse. She was born in Walton, NY to Myron and Alice (Dayton) More on June 2, 1926. As a young girl, she surrendered her life to Jesus Christ as her Savior and Lord at Delta Lake Bible Camp. Between having an ailing mother and the financial burdens of farm life after The Great Depression, she and her sister, Barbara, often lived with their grandparents during the school year. They would join their parents and other two siblings, Harriet and William, at their parents’ dairy farm in Franklin, NY during holidays and summer vacations. Anna’s artistic talents became evident as a child when magazines and paper became her toys. She would spend hours playing with the paper dolls and clothes she had made out of catalog pages. Pictures in magazines became objects for her to use to fine tune her drawing skills. During her junior high school years, the paper dresses she had made as a child blossomed into her making her own clothes and she became known among family members for her sewing abilities. Rejecting an offer by a family member to pay for her to attend art school, she felt called of the Lord to go to The Missionary Training Institute at Nyack, NY (near New York City). Majoring in Christian Education, she graduated in 1950. A couple of years later, a church youth trip she was chaperoning “accidently” ended up at the Cicio home in East Branch, NY. There Anna met her future husband, Gilbert, who attended MTI at the same time she had, but with only a few casual interactions. After a “long distance” courtship between East Branch and Walton, they were married on August 28, 1954 in the Christian and Missionary Alliance Church of Walton, NY. They would remain together for over 66 years. Between 1956 and 1962, they had 2 sons and a daughter and resided in the area of Kingston, NY where she joyfully accepted her life-long career as a devoted wife, home-maker, and fulltime Mom. Anna became an active member in the Christian & Missionary Alliance church of Kingston, NY as an alto in the choir and a junior high girls Sunday school teacher. Gilbert and Anna hosted three or four faithful church widows most Sundays after church with her famous lasagna dinner. They often took part in conducting church services in local nursing homes. She was a member of the Women’s Bible Study Fellowship, holding Bible studies in her home to influence her friends and neighbors for Christ. On Wednesday evenings, she would be found on her knees at the church prayer meetings, fervently praying for her missionary friends and unreached people of the nations of the world. The Cicios also hosted missionaries in their home during the annual church missionary conferences. In the fall of 1976, Gilbert, Anna, and family moved to the Hollywood, FL area in South Florida, and ten years later, she and Gil moved to the Gainesville, FL area of North Central Florida where they lived out the remainder of their days. After Gil’s retirement, they volunteered each Wednesday as part of the “kitchen crew” of North Central Baptist Church and, later, Northwest Baptist Church. Anna enjoyed doing home visitation with her dear friend, Jane Kimbrough. Anna was described by one of her granddaughters as “wise and witty” and by others as “patient.” Her children called her “the best Mom ever.” She enjoyed “painting” words whether in a game, a letter, or a card as much as painting on a canvas with oil paints or water colors. She was a magnificent letter writer; pouring out the details of her life in beautifully, hand-scripted pages (front and back). She spent hours crafting home-made cards which included her personal greetings and original (or carefully selected) poems; always with the recipient in mind. She showed her love for people with sewn gifts; many of which are being passed down from generation to generation. During the early weeks following her beloved husband’s passing, Anna’s sweet, sweet spirit and faithful walk with the Lord shined it’s brightest. She gave her children and friends one final and lasting lesson; how to grieve with praise and thankfulness to God. “Thank Thee, Lord, for a wonderful life, and the many blessings Thou hast bestowed upon us, and for all the time we had together,” she’d pray. Anna was also preceded in death by her parents; her sister, Florence (in infancy), and a twin (never known). Survivors include her sisters Barbara (George) Burman and Harriet (Claude) Carpenter; brother, William Dayton More; son Ronnie (Margie) Cicio of Baltimore, MD; son Richard (Karen) Cicio of Gainesville, FL; daughter Cynthia (Daniel) Frost of High Springs, FL; 12 grandchildren, and 28 great-grandchildren. Fun Facts: At 4’11,” she played basketball in college. As an adult, perhaps in her 40s, she found out she was a twin. She never outgrew children’s shoe sizes. She was named after her maternal grandmother. She was not allowed to have potato chips as a child because her family grew potatoes. They would not buy them, but she sure loved them as an adult. She loved donuts. She displayed her unique and beautiful sense of humor in her personal rendition of a well-known poem when she’d recite, “Patience is a virtue, Possess it if you can, Seldom found in Gilbert, Always found in Ann” A celebration of life will be held Saturday, March 27, 2021 at 1:00 pm at Northwest Baptist Church, 5514 NW 23rd Avenue, Gainesville, FL 32606.

Anna Jane More Cicio, age 94, passed away peacefully in her home in Gainesville, FL on Thursday, March 11, 2021 while being tended to by her daughter-in-law, Karen Cicio, and a hospice nurse. She was born in Walton, NY to Myron and Alice (Dayton)... View Obituary & Service Information

The family of Anna Jane More Cicio created this Life Tributes page to make it easy to share your memories.