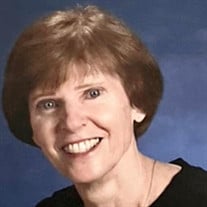 Anita Wilcox Malloy passed away on April 22, 2022, following a courageous battle with cancer. Anita was born on June 1, 1940, in Huntington, WV. She attended St. Joseph’s Catholic High School where she met her husband, Terry Malloy. High school sweethearts, they married in June 1963 and moved to San Francisco, CA, and then to Pittsburgh, PA. They lived in Dunedin, Florida raising three daughters, Laurie (Jerry) Riopelle, Anne (Eric) Benton, and Molly (Todd) Crawley. Anita supported Terry unconditionally throughout his career, moving with him from Dunedin to several different states and finally retiring in Gainesville in 2006. Anita was a devoted mother, daughter, sister, and “Grammy” to 10 grandchildren who admired and loved her. Each of her grandchildren had a unique and special relationship with her that they will always remember and cherish. Anita was the older sister to Pete (Margaret) Wilcox and Tom (Dianne Hadley) Wilcox and was preceded in death by her parents, Charles and Mary Wilcox. Anita lived an exemplary life of service to others, volunteering in numerous capacities for her parish church, wherever she lived, as well as other organizations, and taking care of everyone she met. To all who knew her, Anita was the epitome of gentleness, faith, kindness, commitment, and love. Her deep spirituality included a strong devotion to the Blessed Mother, inspiring her to make a pilgrimage to Medjugorje. This changed her life and served to strengthen her devotion to Mary and to her Catholic faith. Anita Malloy was a beautiful gift to the world whose family was uniquely blessed to have her. A Mass of Christian burial will be held on Thursday, May 5 at 10:00 am at Queen of Peace Catholic Church in Gainesville. Prior to the Mass, a Rosary will be recited in Anita’s honor at 9:00 am at Queen of Peace. All family and friends are welcome. Donations, in Anita’s memory, may be made to the National Pancreas Foundation.

The family of Anita Wilcox Malloy created this Life Tributes page to make it easy to share your memories.

Send flowers to the Malloy family.