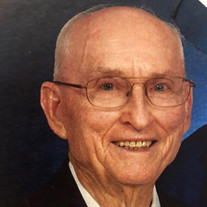 Beloved father, grandfather, and great-grandfather Alvin Durrell Waller passed away peaceful-ly on August 10, 2021 after living to have celebrated his 100th birthday! He was born to Daniel and Lonie Waller in Shawmut, Alabama on May 13, 1921. He followed his two brothers enlist-ing in the U.S. Navy in March 1941. In Naval aviation (aerial gunner and flight engineer) his WWII service was in the Pacific Theater. After the war, while stationed in the Hawaiian Is-lands he met his wife Leota (Lee) Adams (a school teacher) and they were married in Kohala, Hawai’i on March 12, 1947. In 2019, Wally and Lee celebrated 72 years of marriage prior to her passing later that year. After 21 years of Navy service, Wally moved his young family to Cross Creek where he owned the popular fish camp “Wally’s Cross Creek Lodge”. He was a fishing and hunting enthusiast and enjoyed leading a cub scout group in Hawthorne. After selling the fish camp, Wally began a new career as a field technician with the Soils Science Department at the University of Flori-da. He was proud of Lee receiving her M.Ed. from UF and to have all three children attend UF with two Gator graduates, and both grandson and granddaughter-in-law are Gator grads too. Wally and Lee attended many seasons of Florida Gator sports and supported Dance Alive Na-tional Ballet. Wally volunteered at the V.A. Hospital in Gainesville for over a dozen years and enjoyed serving as a mentor in Alachua County’s ‘Take Stock in Children' program. Wally was a member of the First United Methodist Church of Hawthorne for over 50 years and traveled with Lee many times to Baldwin, Louisiana to work at the UMCOR Depot assembling disaster relief kits for global distribution. He and Lee had a shared love of adventure and their travels took them throughout Europe as well as many trips to Canada (Tom) and U.S. Virgin Islands (David) where their sons lived. They especially enjoyed pulling their '5th wheel’ camper with “Tracks to Adventure” trips to Alaska and the U.S. National Parks in the west and southwest. They also enjoyed traveling to attend the annual reunion for Wally’s wartime ship, the USS Kenneth Whiting (a seaplane ten-der) which would be held at different locations each year. Wally is survived by his three children: David Waller (Ursula) of West Palm Beach, Florida; Tom Waller (Allaine) of Ottawa, Ontario; and Susan Waller Scannella (Stephen) of Gaines-ville, Florida; and Grandchildren: Joseph Scannella III (Ashley) of Gainesville, Florida; Vanessa Waller of Ottawa, Ontario; and Great-granddaughter Jane Scannella of Gainesville, Florida. He was proceeded in death by his spouse Leota Waller, his sisters Kathryne O’Donnell and Martha Johnson, and brothers Charles Waller and Jesse Waller. A CELEBRATION of LIFE for ALVIN D. “Wally” WALLER will be held FRIDAY, NOVEMBER 5, 2021 from 4:00pm ~ 6:00pm at FELLOWSHIP HALL FIRST UNITED METHODIST CHURCH of HAWTHORNE, 6680 SE 219th Terrace, Hawthorne, Florida Our family invites you to join us for an informal gathering to celebrate Wally’s 100 years; feel free to share his Gator pride by wearing something orange and/or blue. Memorial donations may be made to Dance Alive National Ballet (dancealive.org); WUFT (wuft.org) and The Nature Conservancy (nature.org).

Beloved father, grandfather, and great-grandfather Alvin Durrell Waller passed away peaceful-ly on August 10, 2021 after living to have celebrated his 100th birthday! He was born to Daniel and Lonie Waller in Shawmut, Alabama on May 13, 1921.... View Obituary & Service Information

The family of Alvin Durrell Waller created this Life Tributes page to make it easy to share your memories.

Send flowers to the Waller family.