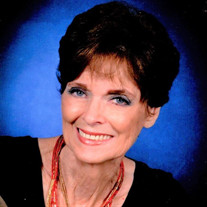 Alice Ann Cline, known to friends and family as Scotty Cline, of Gainesville, FL passed away Friday, March 4, 2022. She was born February 12, 1935, to Frank John and Margaret Tresa Jansen Rameakers in Lindsay, Nebraska. She attended Creighton University in Omaha before relocating to Dallas, TX to work as a stewardess for Braniff Airlines. While in Texas, she met the man who would become her husband, on a blind date. She and Roy Cline celebrated 63 years of marriage, and they enjoyed many travels and adventures throughout South America and the United States. Roy Cline passed away in November of 2021. Scotty had numerous career highlights. She was a model who was featured many times in both print and TV while a resident of Bogota, Columbia. She enjoyed working for Steuben Glass in Corning, NY, and her Gainesville favorite was helping coordinate the annual Hospice Christmas Fashion Show. Scotty treasured and adored her children and grandchildren, and her most cherished moments were time spent with them. She is survived by her daughter, Allyson Cline Anderson, and her husband Emmett; her son, Frank Cline and his wife Anali; five grandchildren, Mary Alice and her husband Kyle Wallace, Carolyn and husband Matt Williams, Chip Anderson, Nicolas Cline, Andres Cline; and a great grandson Matthew McCarthy Williams, Jr. She was a member of Queen of Peace Catholic Church. A Mass of Christian Burial will be celebrated Thursday, April 28, 2022, at 11:30AM at Queen of Peace Catholic Church, 10900 SW 24th Avenue, Gainesville with Fr. Alberto Esposito as celebrant. In lieu of flowers, donations may be made in Scotty’s memory to Alzheimer’s Association https://www.alz.org/.

The family of Alice Ann Cline created this Life Tributes page to make it easy to share your memories.

Send flowers to the Cline family.