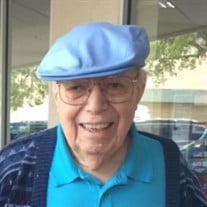 Alexander Sherman, 97, of Gainesville, FL, passed away peacefully on October 24, 2020. Alexander was born on May 7, 1923 in Bronx, New York and was raised in Dayton, Ohio with his mother, uncle, aunt, and three cousins. He moved to Gainesville in 1996. As a young man, Alexander served in the US Navy towards the end of World War II where he taught courses on radar technology. Durning his naval service, he attended Yale University where he received a degree in Industrial Engineering and Ohio State University where he graduated with a degree in Mechanical Engineering. During his expansive career, he worked for Armour Research Institute, Cornell Aeronautical Laboratories, United Aircraft Corporation, the Institute for Defense Analyses and TRW. Alexander published over 50 professional papers during his career. Alexander acted as Project Engineer for the design of Atomics Effects Tests for the Air Force when at Armour Research Institute. He also directed the UPSHOT/KNOTHOLE Effects Program. The program was concluded successfully with the publication of eight volumes concerning the evaluation of the effects of atomic weapons on military structures. As the Head of Air Defense Branch of Special Projects at Cornell Aeronautical Laboratory, Alexander supervised and directed projects dealing with air defense systems. Projects included NTDS, FLAME STRAWS, TAAD, FOTWARD PASS, PLATO, and ANTI-SATELLITE. While at United Aircraft Corporation, Alexander acted as the manager of the Advanced Systems Research Department. Working on Military, Space and Civil systems, he directed a department of 150 scientists, engineers and technicians. He was subsequently promoted to Programs Manager of Surface Transportation in the High Speed Train Program. In this capacity, Alexander directed the entire programs associated with surface transportation. As a staff member for the Institute for Defense Analyses, Alexander participated in aiding the Government (Secretary of Defense, Joint Chiefs of Staff and Congress) in selecting short range air defense systems for the Army. He also assisted with evaluation of US air defenses in the Israeli Mideast War and in evaluation and selection of numerous other systems. Alexander‘s experience at TRW encompassed a wide variety of tasks associated with military systems integration. All the activities culminated with the successful publication of this work. Following his retirement, Alexander consulted with the University of California, Riverside and assisted with the development of their engineering department. In addition to his impressive career, Alexander was involved in many professional activities. Activities associations included American Physical Society, American Association for the Advancement of Science, U.S. Army Pisgah Study, Hudson Institute Defense Study Group, Woodshole AntiBallistic Missile Summer Study Group, Blue Ribbon Committee to Evaluate Center for Social Statistics, American Statistical Association, New York Academy of Sciences and Sigma Pi Sigma. Alexander also served as president of the Jewish Council of North Central Florida for 2 years. His non-professional interests included computer science, traveling, gardening, stamp collecting and opera. He also enjoyed dining and socializing with friends. Survivors include his loving wife of 72 years, Beverly, and children Stephen and wife Pamela, Howard and wife Lynn, and Janet. Grandchildren include Rachel, Sarah and husband Brian, Zachary, Daniel and Jenneva.

Alexander Sherman, 97, of Gainesville, FL, passed away peacefully on October 24, 2020. Alexander was born on May 7, 1923 in Bronx, New York and was raised in Dayton, Ohio with his mother, uncle, aunt, and three cousins. He moved to Gainesville... View Obituary & Service Information

The family of Alexander Sherman created this Life Tributes page to make it easy to share your memories.

Send flowers to the Sherman family.