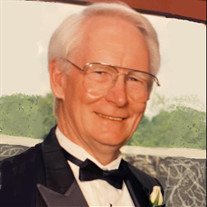 Alexander J. Metzger, age 86 of Gainesville passed away Tuesday, September 21, 2021. He was born March 14, 1935 In Rockaway Beach, New York to Joseph and Hazel Lavelle Metzger Alexander received a Masters in Education from Brooklyn College. He spent 35 years as an educator, coach, teacher and principal. He was a teacher and coach at Far Rockaway, Canarsie HS, Rockaway 180. He retired as the Principal of West Hempstead High School in 1992. He said on numerous occasions that he truly loved what he did in helping shape lives of thousands of young men and woman. In his earlier years his happiest times were creating memories over 18 years vacationing at his summer home with family and friends at Big Bass Lake in the Poconos. His true passions in life were traveling with Ann, all things related to his grandchildren, researching (literally everything that piqued his interest) and the New York Yankees! Alexander "Allie " and his beautiful wife Ann just recently celebrated their 62nd Wedding Anniversary He belonged to the Knights of Columbus and coached for many years for the St. Anthony's CYO in Oceanside NY. Alexander and Ann have had (9) grandchildren (Geno, Kelly, Grayson, Reilly, Jack, Matthew, Stephanie, Maddie and Allison) Alexander was preceded in death by his father Joseph Metzger, his mother Hazel Lavelle Metzger, his brothers Joe, Jerry and grandson Matthew. Alexander is survived by his wife Ann his three children, Kathleen of Minnesota, Allie of Gainesville FL and Eric and his wife Kelly of Fredericksburg TX. A Mass of Christian Burial to Celebrate Alexander's life will be held at Queen of Peace Catholic Church in Gainesville, FL on Friday, October 1, 2021 at 10:00 a.m.

The family of Alexander J. Metzger created this Life Tributes page to make it easy to share your memories.

Send flowers to the Metzger family.