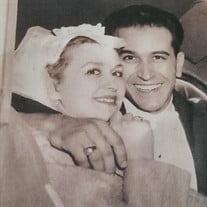 Albert A. Amar passed away peacefully on December 19, 2020, at the age of 92. Albert was preceded in death by his wife Susan Amar. He is survived by his four children, Eva Amar, Ruth Amar, Jackie (Rob) Blanchard, and Bob (Shana) Amar, his three grandchildren, Margaux Janda, Jacob Amar, and Evan Amar. Albert also has countless nieces and nephews. Albert was born in Casablanca, Morocco on December 12, 1928. He was one of 9 children and had a very large extended family. In 1948, at the age of 20, he left Morocco and came to the U.S. with the hopes of a better life. He settled in Gary, Indiana, where he joined his sister who had come to the U.S. a few years earlier. Albert was a butcher and soon found employment and began his career. In 1954 he was drafted into the U.S. Army, where he served 2 years stationed in Japan. After his tour of duty was complete, Albert returned to the U.S. and resumed working. He met his wife Susan shortly after his return home, and the two were married in 1957 and began their family. Albert eventually went into business for himself, running a successful seafood company for many years. Albert and his wife Susan moved to Gainesville in 2001 to be closer to their children. Albert was a lover of music, especially Frank Sinatra. He spoke four languages: English, French, Spanish, and Arabic. He was an automobile enthusiast, owning many different models over the years. He enjoyed meeting people and loved conversation. But his greatest joy came in spending time with this family. He was always generous and kind in spirit and practice. In lieu of flowers, memorials may be made in his memory to Alzheimer’s Association at www.alz.org A graveside funeral service will be held on Wednesday, December 23, 2020, at 12:00 P.M. in the B’nai Israel Cemetery, Gainesville, Florida with Rabbi David Kaiman, officiating

Albert A. Amar passed away peacefully on December 19, 2020, at the age of 92. Albert was preceded in death by his wife Susan Amar. He is survived by his four children, Eva Amar, Ruth Amar, Jackie (Rob) Blanchard, and Bob (Shana) Amar, his three... View Obituary & Service Information

The family of Albert A Amar created this Life Tributes page to make it easy to share your memories.

Send flowers to the Amar family.