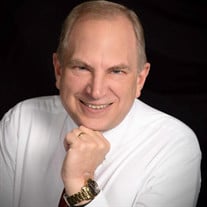 Reverend Alan Dean Struckmeyer December 24, 1959- March 18, 2021 The Reverend Alan Dean Struckmeyer was called home to his Lord on March 18, 2021, after a battle with Glioblastoma, with his loving wife by his side. His faith gave him strength, even to the end. Alan was born to Marvin and Verna Mae Struckmeyer on December 24, 1959, in Brenham, Texas. As a boy, he loved fishing with his father and his sister Cathleen. He would go on to study ministry at Concordia University in Austin, Texas, and Concordia Lutheran Seminary in Saint Louis, Missouri. Alan faithfully served as pastor at St. John Lutheran Church in Pryor, Oklahoma (1986-1989), Immanuel Lutheran Church in Temple, Texas (1989-2007), and concluded his ministry at Abiding Savior Lutheran Church in Gainesville, Florida (2007-2021). During his ministry, Alan enjoyed preaching for the residents of Oak Hammock and The Village in Gainesville and delivering the weekly chapel message for the young students at the preschool at Abiding Savior. He loved making a joyful noise singing in the church choir for years. He devoted much of his time to feeding the hungry through Meals of Hope and had a passion for many other charitable organizations. He faithfully served on mission trips to places like Brazil and Guatemala, spreading the Gospel wherever he went. Alan married the love of his life, Linda Rose Knapp, on November 29, 1985, in Saint Louis, and together they raised three boisterous boys, Andrew, Aaron, and Austin. He led his family with faith and determination in the same way he led his congregation. He dedicated his life as a husband and father to teaching his family the Love of Christ and the Joy of the Gospel. Alan is survived by his wife of 35 years, Linda; sons Andrew (Gaby) of Katy, Texas, Aaron (Alex) of Orlando, and Austin (Loren) of Boca Raton; Parents Marvin and Verna Mae Struckmeyer of Navasota, Texas; Sister Cathleen Ott of Plano, Texas; and a granddaughter (Aaron & Alex) expected September 2021. He was preceded in death by his brother-in-law James Ott and nephews Matthew and Bradley Ott. Alan’s celebration of life will take place on Saturday, March 20, 2021, at 11:00 AM at Abiding Savior Lutheran Church in Gainesville and on Monday, April 5, 2021, at 11:00 AM at Trinity Lutheran Church of Navasota, Texas. Both services will be live-streamed. Interment will follow at a later date. In lieu of flowers, the family humbly requests any gifts or donations be made to the Jubilee Scholarship Fund of Concordia University Texas or a scholarship or charity of your choosing. Well done, good and faithful servant.

The family of Rev. Alan Dean Struckmeyer created this Life Tributes page to make it easy to share your memories.

Send flowers to the Struckmeyer family.