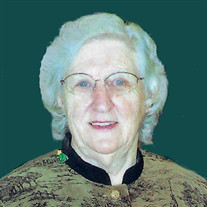 Ada Sharp Halliday, age 95 passed away peacefully of natural causes February 25, 2021 in the presence of family. Ada’s parents, William and Mary Lyon Sharp immigrated from Glasgow, Scotland through Ellis Island in 1922, and settled in New Jersey for many years. Ada was born July 12, 1925, in Morristown, NJ. During World War II Ada worked in the defense industry in Norfolk, VA where she married Robert Franks. The Franks had two sons Robert, Jr and Dennis. The Franks relocated to Miami, Florida in the mid 1950’s. Ada made a living for her two sons in the Hotel and restaurant industry in Miami Beach and for many years was an auditor at some large prestigious hotels. In 1963, Ada married Jim Halliday. During the 1970’s Ada and Jim Halliday were very active in dog obedience training and trials and in 1975, Ada served as the President of the Doberman Pincher Club of Florida. Ada was a member of Elks Wives at Gainesville Lodge 990, Ada was also an active member for a number of years of the VFW auxiliary in Bushnell, Florida. She enjoyed watching the Lady Gators Gymnastics. In 1980s Ada and Jim moved to Gainesville and resided here until their deaths. Ada was predeceased in death by husband Jim, and son Dennis. Ada is survived by her oldest son Robert (Kathy) Grand Children; Jamie (CJ), Rob (Jessie), and numerous great grand Children and nieces and nephews. The family will receive friends Friday, April 2, 2021 from 9:30 a.m. to 10:00 a.m. at Faith Presbyterian Church with Rev. Kevin Nelson officiating. Memorial will begin at 10:00 a.m. She will be interred at Florida National Cemetery in Bushnell, Fl with her husband, Navy Veteran Jim Halliday. In lieu of flowers, donations may be made to a charity of your choice in Ada’s memory.

The family of Ada Sharp Halliday created this Life Tributes page to make it easy to share your memories.

Send flowers to the Halliday family.