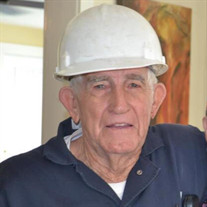 Abraham Lincoln Painter, 92, gained his heavenly wings on August 20, 2020. He was born April 25, 1928 in Blount County, Alabama to Jonah Fulmer and Mary Octavia (Ridgeway) Painter. He was a second-generation brick mason and traveled throughout the south before arriving in Gainesville, Florida in 1957 to work on Williamson Hall, the first of many jobs on the University of Florida campus he would work on in his lifetime. In 1968, Painter Masonry, Inc. was founded. Over the course of his 44 years with Painter Masonry, Abe worked on countless buildings on the University of Florida campus (including the McKnight Brain Institute, Smathers Library West, the Cancer and Genetics Research Center, Emerson Alumni Hall, Hume Hall, McKethan Stadium, Florida Field North End Zone, Pressly Softball Stadium, the Basketball Practice Facility, and many others). Several schools, churches, municipal buildings, and commercial facilities in the Gainesville area bear Abe’s masonry influence. Abe retired in 2012 at the age of 85 as a Master Brick Mason to spend more time with his wife Etoile “Granny Toad” Thompson Painter. Abe loved God, his savior and his family fiercely, and was a true man of God. He was a member of Westwood Hills Church of God where he was one of the founding members with the first service being held in his home in 1966. In 1999, Westwood Hills Church of God dedicated their sanctuary in Abe’s name to recognize his many years of service, hard work, love and devotion to the church and his faith. He was an avid Gator fan and a Gator Booster since 1979. For over 40 years, you could find Abe and his wife at nearly every home Florida football, basketball, and baseball game (and many away games in their motorhome). He was a force to be reckoned with. He was loved as much as he loved, and was known all over Gainesville in his navy-blue coveralls and white hard hat. Abe will be tremendously missed by many. Preceding him in death by a mere five weeks was his beloved wife of 73 years, Etoile Thompson Painter. He was also preceded in death by his parents, J.F. and Mary O. Painter, his brother; J.L. “Lou” Painter, sisters; Janette (Curtis) Horton, Annie Ruth (Guy) Cleveland, and Velma Sue (Troy) Meade, and his great-grandson Miles Clayton. Abe is survived by his brother Curtis (Barbara) Painter; sister in laws; Ladora Hyde Painter, Barbara Jo Thompson Fowler, Dorothy Mae Thompson Nelson, and Marie Everett Thompson, brother in law; Jack (Joanne) Thompson, sons; Jerry Mac Painter and James Fulmer (Elise) Painter and daughter Nancy Painter (Michael) Clayton , 8 grandchildren; Paul Painter, Connie Gruenwald, Dawn (Timothy) Campbell, Alison (Graham) Glover, Page (David) Gritte, Jon (Rebekah) Clayton, Connor (Taylor) Clayton and Rene Clayton, 17 great-grandchildren; Austin (Ana) Lovin, Jessica Painter, Kaitlyn Gruenwald, Blake (Savannah) Painter, Adam (Emily) Painter, Wade Campbell, Holly (Jordan) Jabbar, Caleb Campbell, Coleman Campbell, HannahGrace Glover, Abigail Campbell, Gray Glover, Blakely Clayton, Caroline Jane Gritte, Cillian Clayton, Henry Gritte, and Caydence Clayton, 4 great-great grandchildren; Adeline Painter, Lucy Lovin, Ammery Painter, and Harlow Painter, and many loved nieces and nephews. A private family service will be held in the sanctuary that is honored by his name at Westwood Hills Church of God, followed by interment at the Chapel in the Meadows at Forest Meadows Cemetery. Livestream of the service can be found on Jerry, Jim, and Nancy’s Facebook at 11:00am Saturday, August 29th. In lieu of flowers, contributions can be made in his memory to the Abraham and Etoile Painter Scholarship Fund at Santa Fe College, 3000 NE 83rd Street F-207, Gainesville, FL 32606 or at www.sfcollege.edu/foundation/donation.

Abraham Lincoln Painter, 92, gained his heavenly wings on August 20, 2020. He was born April 25, 1928 in Blount County, Alabama to Jonah Fulmer and Mary Octavia (Ridgeway) Painter. He was a second-generation brick mason and traveled throughout... View Obituary & Service Information

The family of Abraham Lincoln Painter created this Life Tributes page to make it easy to share your memories.

Send flowers to the Painter family.